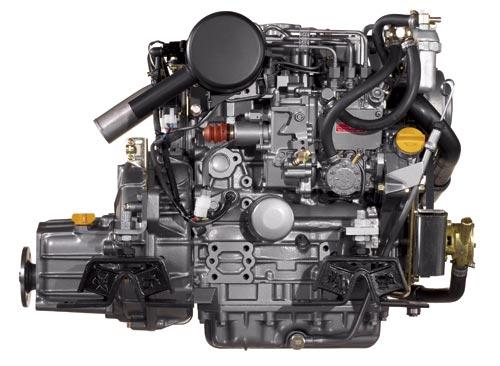 Sometimes an engine manufacturer just gets it right. The engine has good inherent balance and is fuel efficient and torquey. Features that not only make for a good industrial engine but also a marine unit.

Trouble is indirect-injection engines have way higher compression ratios than comparable output direct-injection units, so hand starting is out. The old indirect-injection 3GM30, discontinued about a decade ago when the 3YM30 was released on the Oz market, was fitted with hand cranking in addition to the starter motor, which was a bit optimistic considering the engine had a 23:1 compression ratio. But Yanmar doesn’t want its engine owners suffering hernias or strained backs so it has thoughtfully deleted any hand-starting facility. Electric starting with glow plug preheat is king, so you’d better keep the bilge dry!

Now for the boring bit. The Yanmar 3YM30 develops 28.6hp at 3600rpm or 26.9hp continuous at 3490rpm from its 1115cc OHV engine with gear-driven pushrods and two valves per cylinder. The cylinder bore is 76mm and stroke 82mm, which helps the engine achieve good combustion chamber efficiency. The maximum torque output is 69.5Nm at 2000 to 2500rpm. The engine has an A rating, or up to 500 hours of running per year with a maximum of five per cent Wide Open Throttle operation.

Being freshwater (heat exchanger) cooled the Yanmar 3YM30 has a centrifugal freshwater circulating pump and positive displacement saltwater pump, both at the forward end of the engine for easy access. The standard voltage-regulated alternator pumps out a max 60amp, with an 80amp unit optional.

Complete with mechanical cone-clutch gearbox the Yanmar 3YM30 measures 716mm long by 462mm wide and 618mm high, so it’s pretty compact for its output. The mechanical box has a choice of reduction gear ratios but my recommendation for most yachts is the 2.62:1 ahead and 3.06:1 astern ratio box, which gives more power astern. With box the total dry weight is 133kg.

The SD20 saildrive version has 2.64:1 ratios ahead and astern and only a dog clutch, so don’t try quick shifts from ahead to astern without first letting the engine idle. The total dry weight jumps to 154kg.

Oil and filter changes should be done annually using either SAE 10W30 or 15W40 oils, the latter better for tropical climates.

Sometimes it’s way hard to get a hull to test diesels but fortunately my mate Theo has twins in his Lagoon 380 cruising cat. Saildrive models are used and as these are mounted aft of the rudders there’s plenty of space to fit Gori folding props. These simple but absolutely brilliant designs provide an overdrive facility for motorsailing or motoring in calm conditions to maintain the right amount of engine load.

When I tested the engines during a delivery trip from Brooklyn on the Hawkesbury River up to Lake Macquarie, they had clocked about 1000 hours each with the only problem being a leaking exhaust gas manifold on one of the engines. Both started instantly hot or cold with no exhaust or oil smoke appearing and across the entire rpm range were quiet and very smooth for three-cylinder engines. And with its massive 22-foot beam the one ahead/one astern technique easily swung the 8.5-tonne hull in its own length.

Once the technique for engaging overdrive had been mastered, we were able to maintain engine load at all rpm, so important for the 3YM30 which should be run continuously at or greater than 2500rpm to prevent cylinder bore glazing from insufficient load. Sensibly the 16.5 x 12in three-bladed props were small enough to allow the engines to reach 3700rpm at WOT with the overdrive off. When on the prop pitch is about 14 inches.

Even at WOT there was no exhaust smoke and the biodiesel added to the straight fuel (up to 10 per cent legal maximum) eliminated any pungent odours we’ve all come to love in the past in following seas.

I confess I do like the ability to hand start a diesel, as could be done easily with the old direct-injection Lister units, but the plus side of the 3YM30 is that it runs relatively cleanly. Overall its engineering is way ahead of the Listers and just from Theo’s experiences alone its reliability is simply brilliant.

For more on the 3YM30, contact Power Equipment, email: power.equipment@yanmar.com.au

* Sea-trial figures supplied by the author. Fuel burn per engine.