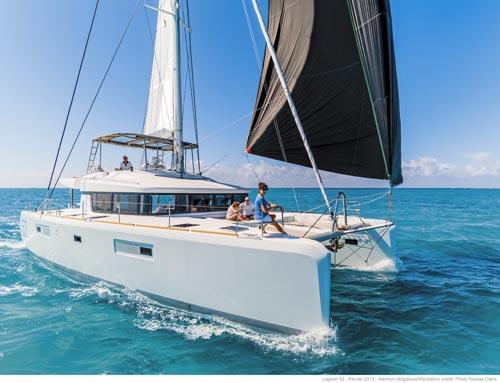 The latest Lagoons have had a makeover to soften some of the harsher angles but remain distinct-looking cruising cats that are stronger on practicalities than finesse. No bad thing when you are at sea, as I found when sailing one along the French coast.

For the shape of the new 52 (and the 39), long-term designer Marc Van Peteghem (from design house VPLP) collaborated with former director of Renault’s Quality and Corporate Design, Patrick le Quément who refined the new exterior. The result is Lagoon’s signature blunt lines have been softened at the plumb bows where the gunwales have been angled in a diamond cut. Another change to the square coachroof has been the creation of an overhang above the windows, giving increasing shade and improved aesthetics. To achieve this the roof has been strengthened with a grid of stringers to support the new mast position aft.

Lagoon has opted for a flybridge single helm which worked at sea for me, giving all-round views with lounging area plus hatches up here as well; and unlike the old 500 there’s deck access from either side. Cleverly, the big wheel base moves sideways, so can be adjusted to your preference. Swinging it port or starboard allows clear access to the instruments – the Raymarine Hybrid plotter also swivels on a base – and the readouts for heading and autopilot are clearly visible to the steerer.

Another plus is the pit-layout of all sail controls, with Harken sheet and halyard winches, which gave plenty of working space. Also commendable is the large rope bin, an improvement on some previous models. As the helm is near the mast base, halyards have little friction and a short run to the winches while the mainsheet is well clear of the aft lounging area. As I found when sailing the 52 with all running rigging near me including the mast, this is a large boat that can be sailed shorthanded or even alone should you feel the need to escape the madding crowd occasionally.

One item that reminds you that this is indeed a 52-foot catamaran is the size of the Dacron mainsail that comes with three reefs and is supported by lazy jacks.

Elsewhere there was little to complain about and lots to like, such as the fully enclosed aft deck area with wetbar and second sink unit (with both icemaker and Corian-topped bar-fridge). The entire area can also be enclosed in clears. Locker space is immense and even the beefed-up roof has storage (for the table and emergency steering), so plenty of stowage room for that world trip or factory pick-up in Bordeaux and leisurely voyage home to Oz – perhaps with the lazarettes full of the region’s famed red. You descend steps from the cockpit to access the aft cabin and the layout gives a self-contained feel to this private berth.

Elsewhere on the Lagoon 52 the flat decks and flush hatches fully maximise the immense topside space. The aft deck entertaining space is also very useable, although not as large as some 52-footers.

My test boat was the three-cabin owner’s version, with a suite that took up the entire starboardside hull. Space is plentiful, from the large king-sized double bed aft to the central lounge with desk and seat central, to the elongated bathroom forward. Nice touches include leather storage pouches, plenty of shelf space for the flatscreen TV and tall wardrobes.

Portside, the VIP guest cabin lived up to its title with private aft-deck access leading to a spacious en suite double, so claustrophobia for newbie sailors should be minimised – just mind your head on the inboard side of the bed where the cockpit bulkhead impinges. The bathroom has aft-facing windows, a separate shower cubicle and 2.05m headroom. Natural ventilation and importantly light are also plentiful, thanks to those huge portlights (with one-way viewing) and flush hatches. A large desk/vanity situated against the bathroom bulkhead utilises the available space well.

The forward third cabin has its own corridor leading to a very flexible area with the aft section a sizeable office space, while a hatch in front of the island berth forward leads to the crew quarters (with separate deck access). The island bed lies athwartships and has slatted wood for comfort, like all the Lagoon 52’s double berths.

The saloon is an airy space with a portside galley, forward navigation station and lounge starboard.

With an island bench and Kerrock composite work surfaces following the shape of the saloon – work surfaces have been maximised here because there’s no second accommodation corridor to impinge on it – the Lagoon 52’s galley gets my vote as one of the best I’ve seen. It’s a breakfast spot where large families or charter groups can all feed themselves with ease, while conveniently serving the diners on the aft deck as well. For cold storage there’s a walkthrough down to the starboard hull where the household-sized fridge and freezer sit beside the cupboard for the washer/dryer.

Our test boat was only the second hull out of the mould. Hull construction is vacuum infusion – something the Bordeaux-based Lagoon was an early pioneer of – while above the waterline is balsa core and solid GRP beneath. Fairly deep mini-keels are used and combined with rudders of matching draft should minimise leeway. The hull design has incorporated fine aft chines now, which lends the topsides a slightly less imposing overall feel. The bridgedeck has the proven gullwing-shaped underside to smooth the effect of waves and clearance should be sufficient to minimise windward wave slap, the bane of many cats.

Using the power controls with the large-diameter steering wheel requires tilting it to port to avoid reaching through the spokes. The big wheel and other quality Danish Jefa-made linkages gave a responsive feel with minimal play as I swung our bows past the breakwater. Pushing the electronic throttles forward I eventually reached 9.1kts with 3200 revs showing on the 54hp Yanmars before making sail. Wind in the Med’ can be all or nothing – as I found out during my eight years of living on its shores aboard my own yacht – so a varied sailplan is required to avoid hours of tedious motoring.

Our sailing day was a Code Zero one, so I unfurled this big sail using the Harken 50 electric winch. Before that the mainsail had hoisted without fuss after unzipping it from its bag, and easily accomplished as there’s good ergonomics in the running rigging layout. A bank of foot buttons combined with the electric winches above them gives you good halyard control, while the mainsheet winch and track is behind on the hardtop bimini. The mainsheet is double-ended, so can be conveniently operated from both sides and leave sunpad occupants undisturbed behind as you work the sheets.

In terms of performance I’d take the big, top mainsail option (6m² larger than standard) to help power this 26-ton hull along in light airs. The cutter rig was also very welcome in the 10-knot breeze, giving a steady 6.5kts with Code 0, while views from the centralised flybridge helm allowed me to trim both sails. Also fitted is the self-tacking genoa which has a long track to run on and should work well on all points of sail.

Gybing the Code 0 went without drama after my host Nicholas had skipped down to ease the clew around the forestay. Maintaining momentum in the gybe is important on these large cats and this was done without much effort as I drove the 52 through a few long gybes sedately making our way back along the coast with some heavy westerly clouds chasing us from the Spanish border.

Wishing to grab a few images before the rain hit, I clicked the Raymarine autopilot into wind mode then I grabbed the camera before climbing down onto the foredeck to shoot some images. Back on the helm with the rain now blistering off the decks I was perfectly dry under the canvas bimini as I wound in the Code 0 then unfurled the genoa to tack us back towards the harbour, creeping up to 45 degrees on the flat seas as SOG showed 6.4kts in the 13-knot wind. Once adjusted on its track, the genoa ran across as I turned the big stainless wheel on the tack – smoothly done like everything on this well-designed Lagoon 52.

The Lagoon 52 is a comfortable cruising catamaran that is practically laid-out both topside and below decks but does require the optional large sail plan to move the heavy hull at pace.