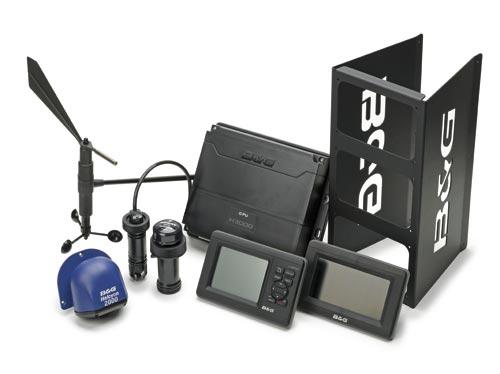 Autopilots avoid the tedium of helming but, nowadays, do much more than that. A modern autopilot will steer a truer course than a helmsman, can allow the solo sailor to do a sail change safely or the offshore angler to run the boat on a programmed fishing pattern. They also have the advantage on larger vessels of acting as a separate backup steering system.

Modern autopilots can respond to different sea conditions, changing the way in which they move the helm in response to the changing impact of wind, waves and currents. Some of the latest pilots use a form of artificial intelligence (AI) software to record a boat’s historical responses to the different conditions and then use the information to improve the behaviour of the steering system and thereby the performance of the boat.

Connecting the autopilot to other devices, such as wind instruments on a yacht, allows wind angle to be steered to, and hooking it up to a GPS allows the sailor to plot an entire course on waypoints, so the functionality has become staggering. However, it should be remembered that keeping a proper look-out at all times is a tenet of good seamanship.

ABOVE OR BELOW
Autopilots can be categorised into above-deck and below-deck varieties. The basic tiller pilot and wheel pilots are installed in the cockpit, whereas the more sophisticated below-deck variety and its components are installed around the boat. A final category, generally the domain of the offshore sailing purist, is the windvane which relies on wind power alone, rather than a beefed up alternator and a bank of batteries, which is something to consider if fitting an aftermarket autopilot.

An autopilot operates by repeatedly comparing the boat’s magnetic heading to the boat’s actual heading, so the compass is obviously a key part when choosing an autopilot. Typically, a fluxgate compass, an electronic version of the traditional variety, is integrated into a tiller pilot’s circuitry and the entire unit clicks on top of the boat’s tiller, with an electrical cord running off it for power. The functionality of this unit can be greatly increased by including data capability, via either the manufacturer’s approved connections or more commonly the global interface standard of NMEA 0183 or the latest NMEA 2000.

CHOOSING THE BEST
Below-deck autopilots are the most popular units for motorboats and larger vessels due to their sophistication and power. The basic components are: a mechanical arm that directly connects to the rudder; a computer; compass; and, control unit. Further sophistication can be added with the addition of a rudder-position sensor (to update the system with real-time rudder-angle data).

As anyone knows who has helmed in a rough sea, a considerable force is exerted on the rudder so the appropriate size of mechanical or hydraulic ram is important. The industry consensus is that mechanical is more efficient but hydraulic rams are stronger.

Manufacturers such as B&G have also marketed a hybrid of the two systems. Inboard autopilot drives are connected to the rudder or quadrant, usually via a push-pull rod called a linear drive. It’s wise to remember that an aftermarket installation should use a strong bulkhead fixing to support the considerable forces involved. When gauging an autopilot’s capability remember to always take the fully laden displacement weight of your vessel into account, which may be 20 per cent above the designed displacement.

Using an autopilot efficiently also involves ensuring the trim of the vessel or the sail setting on a yacht is sufficiently balanced to avoid the unit being overworked.

Downwind and in a following sea can be tough going for autopilots but the latest technology, such as Raymarine’s SPX pilots have a built-in rate gyro which, combined with the company’s AST software, manages to intelligently monitor the yaw of the vessel and actually anticipates course changes.

A rate-gyro sensor detects and measures angular rates of change and compensates for this to give unbiased data readings. This is especially important where conditions are rough and fast moving, such as offshore yacht racing, so this technology has been incorporated into the latest B&G H3000 autopilots, a popular choice for boats in events like the Volvo round-the-world race.

LIMITATIONS
Despite the latest technology some things don’t change and one issue is compass error which includes variation (movements of magnetic north), deviation (local anomalies) and a less well-known problem, compass dip.

Post-installation calibration can generally fix the first two anomalies, but dip is a bit trickier. This dip, caused by the bending of the earth’s lines of magnetic force, slews compass cards and is acute on north-south headings. In a nutshell, this means that autopilots set on a southern heading in the southern hemisphere can deviate a bit, whereas on a northern heading the dip is less apparent.

Maybe not hugely significant to the average boater, but it illustrates an important point: electronics are not infallible. Having said that, the latest technology, from manufacturers such as Furuno and Comnav, use satellite GPS compasses to avoid these errors, if you can stretch your budget to it. As its name suggests, the GPS compass takes its heading reference from satellites, which don’t suffer from any magnetic variation so give a constant bearing wherever you are.

CONNECTING AUTOPILOTS
The increasingly popular newer NMEA standard, NMEA 2000, allows buyers to be much less reliant on a single-brand solution for all their onboard electronics, and this maturing standard means that self-installation is viable if you’ve got some basic skills.

In the past, major brands such as Raymarine, which offers a complete range of products, traditionally benefited from ease of interfacing all one-brand electronics for navigation, pilotage and instrumentation needs. NMEA 2000 negates this, however, the previously slower standard NMEA0183 (a mere 4.8KB/sec compared to NMEA 2000’s 250KB/sec), remains the common standard.

NMEA is a combination of language and protocols and NMEA0183 is the lingua franca on most chartplotters, GPSs and autopilots currently in service.

For aftermarket installers, the big progression with the latest standard is its plug-and-play cabling bus, which uses proprietary T-joints to link-up devices including the ability to plug in a single T-connection power supply to run everything. Mixing and matching the two standards is now possible via the use of electronic converters, so, for instance, your newly installed autopilot (using NMEA 2000) can communicate with your existing fluxgate compass (NMEA0183).

AUTOPILOT CONTROL
The user friendliness of control units can vary according to personal preference. For instance, some units, such as the Coursemaster 850i and the TMQ AP4, have a knob and arrow keys offering a simple, no-fuss approach, whereas LCD display units with more complex drilldown menus, as found on the latest Simrad AP28, give more steering options but with added complexity.

Feature-rich autopilots offer everything from fish trolling patterns, automatic helm bias, leeway control to complete course waypoint setting. But you should remember to focus on your needs — a good MOB (man overboard) function may be important for coastal work, or perhaps a user-friendly wireless remote control if you’re a single hander. Finally, reliability has to be the key feature of any autopilot.

BOTTOM LINE
In the ARC 2009 Trans-Atlantic cruise, it was reported that 133 out of the 166 boats carrying autopilots used Raymarine. Of these the ST4000/6000/7000+pilots were used by 84 boats, followed by 60 boats using the Raymarine SmartPilots 6001/7001/8001. Second placed brand was B&G’s Hydra on nine boats and B&G H3000 on six. Simrad was a distant third, with five boats. However, in the overall satisfaction stakes, B&G H3000 (popular on larger yachts and raceboats) was the winner.

Similar figures apply for 2008. In the ARC 2008 edition of that even, 191 out of 213 boats used Raymarine and of these the ST6000+pilot was used by nearly a third of this fleet, followed by the Raymarine SmartPilot 6001/6002 models. Second most popular brand was B&G’s Hydra with Simrad a distant third. Although, in the overall satisfaction stakes, Simrad was the clear winner.

WHAT MAKES AN AUTOPILOT?

WHAT THE PROS SAY
Expert advice by Aquatronics on choosing the right pilot for after-market installation:
1. Always choose a pilot drive that is sufficient for the job. All manufacturers will provide information about the pilot’s drive capability.
2. Performance. Maximum helm drive-time must be less than 15 seconds lock-to-lock. So, for instance, a small hydraulic pump driving a big ram will not work.
3. Once the drive is chosen then consider the electronics and choose the course computer with sufficient current for the pump or drive motor. Remember, in a heavy sea the drive may be working almost continuously to keep the boat on course.
4. Many old boats have a perfectly good drive unit but require updated electronics.
5. Correct settings for the autopilot make a significant difference in performance and handling.
6. Installing the compass away from magnetic fields is very important and a gyro will significantly assist with reducing the rudder activity and produce smoother turns and better performance. Nearly all modern pilots have them built-in or are offered as a standard feature.
7. A correctly adjusted and operating rudder feedback unit (RFU) is also important. Many failures occur by RFUs sited incorrectly or with the wrong geometry.
8. Make sure the power supply cables are sufficient for the drive so there is minimal voltage drop to the pilot drive-motor and course computer. Limiting the power supply will have an adverse impact on the drive FET's and often cause early failure.
9. Check for leaks from the hydraulic system and get them repaired. Make sure all the air is bled from the system and follow the manufacturer’s recommendation for siting the hydraulic pump.
10. If installing an electric linear drive, ensure the bulkheads can take the load. Strengthen where necessary and consult a shipwright if you’re uncertain as to the loads that might be experienced.
11. A good autopilot will always outperform the best helmsman.

If various manufacturers’ brands are in place consider installing a multiplexer.

Drive units require a strong mounting position to take the heavy loads (e.g. 295kg for a Raymarine S2G SmartPilot on a Westerly 35 yacht).

Fluxgate compasses should be centrally mounted on boat, but not too near the bilge where water can affect them, and at least 1m from magnetic sources — on steel boats this could be up the mast.

Control unit mounting at the helm should be easily accessible by steerer (rather than requiring arms stretching through wheel spokes, for example).

Dealer commissioning may be required to ensure valid warranty.

Photos: B&G H3000 pilot is a popular choice with racing sailors; Australian-made Coursemaster autopilots, with the 850i seen here installed on the helm dash at right. Its simple knob operation avoids the confusion of complicated screen menus - the unit is suitable for sail and powerboats from 6m to 40m; Garmin are moving beyond their handheld GPS roots to now include an hydraulic GHP Autopilot in their range, which comes with a rate-gyro compass as standard; A typical wheel pilot, Raymarine's SPX-5 is a helm-mounted autopilot designed for use on small sports and fishing boats, typically up to 9.2m; B&G autopilot wireless remote; Australian manufacturer TMQ has four autopilot models (12 or 24V-DC) to cater for boats from leisure through to commercial shipping. These autopilots have the ability to accept input headings from a fluxgate type compass, magnetic compass sensor (pictured) and NMEA0183 heading data from either a gyro or GPS compass. Dual heading inputs can be connected to provide system redundancy should that be required; Young Jessica Watson setting off on her circumnavigation, using a combination of Australian-made Fleming windvane gear and electronic autopilots to help with steering; Autopilot components in a typical installation.