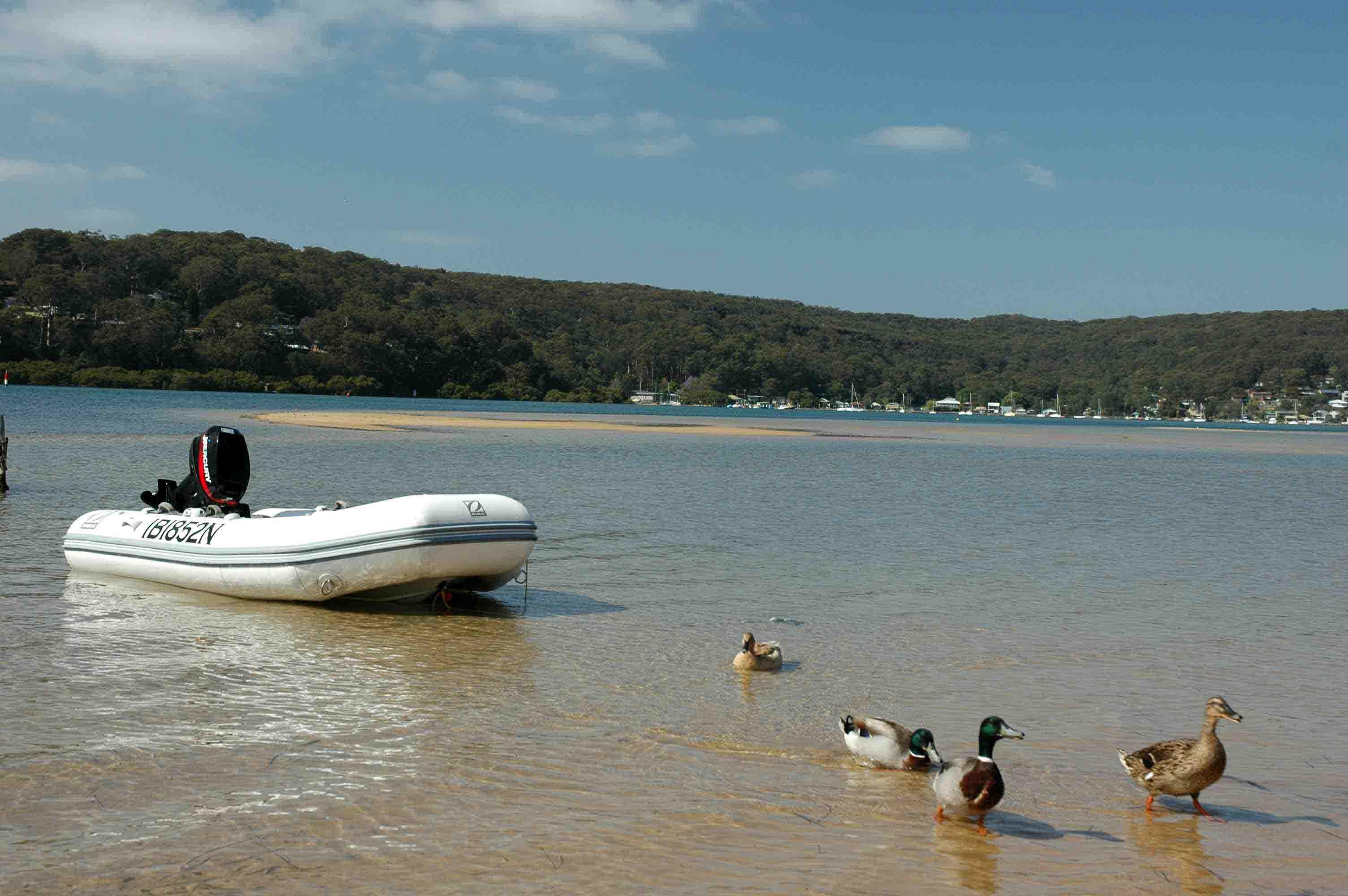 They say practice makes perfect, so we put the tenet into practice, performing a dummy run of what should be, in only a matter of weeks now, the real deal — serious summer holidaying afloat. Destination: Hardy’s Bay, that agreeable anchorage in Brisbane Water just an hour or so from Sydney Heads in a fast boat. We have a penchant for the fetching Central Coast village.

With one of the two pink public moorings secured to the bollard on the bow, our practice takes on a serious meaning. First, the careful extension of legs onto gunwales, the readjustment of the deckchairs and, the difficult part, practicing idle contemplation. This means no phones, computers, generators, extraneous noise or distractions. Just look around and chill.

This lolling about lasted for several hours before trusty, crusty crewmate Katherine decided to practice, err, fishing. She attached a rubber lure to the end of the line, opened the bail arm on the reel, and tossed the offering towards the oyster leases dotted some distance astern.

LEAPING LIZARDS!
Moments later, lady luck struck and she was battling a leviathan from Brisbane Water. In fact, when it emerged, the giant dusky flathead was of such proportions it barely fitted in the landing net. Hallelujah! Dinner for the family. And the fishing gear passed the test.

With the fillets in the fridge, we launched an assault on Hardy’s Bay. This necessitated testing the davit that lowers the rubber ducky from the foredeck, over the bowrail, into the water. A note was made to replace the cable before the real holiday season. Thanks to recent servicing of the 15hp outboard, it started easily.

Off we go, tying the tender to the public wharf, throwing the backpack over the shoulder, and scouting about town, eventually to climb the hill and reach Killcare Beach. It’s hard to escape the holiday vibe at Killcare, one of the few surf beaches that is accessible by boat near Sydney, where the surf club has undergone a brilliant renovation thanks to a cash injection from neighbour John Singleton. You can grab grub to go at the kiosk on the lower level or dine like King Neptune above, where the views over the beach to Bouddi National Park are stirring.

Our toddler takes to the natural rock pool in the corner of the beach, before rolling in the dry sand like a contented pooch. Some beachcombing reveals the spent casing from a Port Jackson shark egg and some decent shells. The shadows lengthen. Time to make tracks.

You know you’re out of Sydney when the locals offer you a lift. We jump aboard with the lady from the surf club and hitch back to Hardy’s Bay, otherwise a 20-minute walk. The convenience store at Hardy’s Bay is doing a roaring trade in longnecks of cold beer, sipped by locals under the yum yum tree, fronting the public wharf — yonder the sun sets. We buy frozen chips to complement the fresh flathead fillets Katherine has stashed aboard our boat. Eventually, dinner is devoured in the cockpit overlooking the Rip Bridge. Bliss.

Sleep comes easily when you have stretched the legs and are sated. Hardy’s Bay resembles a sheet of glass, the reflection of the Milky Way eventually replaced by golden hues at daybreak. It’s then that eagles, pelicans, cormorants and cockatoos fight for attention, as cappuccinos emerge from the onboard machine run off the inverter. No need to start the generator and break the reverie.

Next, we bundle ourselves back in the tender and strike out for a place to practice some frolicking over the flats. Across the stream is Ettalong, with clean sand beaches and broad sandbanks that, in a short while, are swallowed by the flood tide. The water is oceanic, so-much-so we find a couple of wayward blue bottles.

Gazanias give a showy floral display among the sand dunes fronting the ramshackle holiday homes at Ettalong, as ducks waddle about, whiting sift the sand for marine worms, and the odd local retiree strolls past with a contented dog in tow.

DOTTY LOVE
A few hundred metres away, Andersons Boat Shed calls. There are ice creams —
lick, lick, another holiday custom deserving of practice — but it’s the 1960s timber cruiser on the slip that has undergone a labour-of-love restoration by its local owners that commands greater attention.

The proud owners reveal a photo album detailing Dotty’s tireless rebuild, which becomes the subject of lengthy discussion and an onboard tour. Amid the before-and-after pics are snaps of buckets of blue swimmer crabs, big bluenose bream, and whiting as thick as your forearm. Fishing in Brisbane Water is pretty good. The best time is after dark, I’m told.

Back aboard, we top up the tanks using our new watermaker and could now hunker down at Hardy’s Bay for a week on the anchor. But if we don’t hightail it home about now we’ll have no other choice. Navigating around Brisbane Water requires strict adherence to the minefield of port and starboard and isolated danger markers that define the skinny channels. Yachts will only make it past Lobster Beach at the mouth at the top of the tide. The bar also demands that you wear a lifejacket. Give it a wide berth in a big southerly.

A big southerly is forecast so we depart the sleepy Central Coast and train the bow on Bangalley Head near Whale Beach, then Long Reef, then Sydney Heads. We’re back in our berth in less than an hour and, I should add, feeling rather expert at the fine art of holidaying. A couple more practice runs and we’ll be great practitioners. Polish up on your skills. As they say, any excuse.