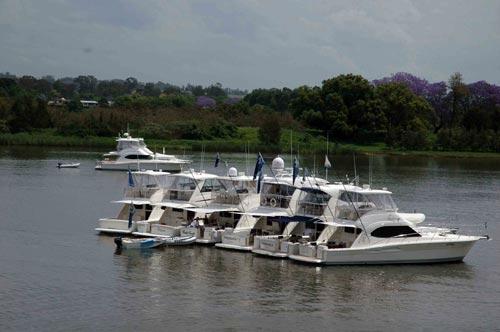 The social side to boat ownership is a big hit for brand-loyal and badge-proud captains and crews these days. Whereas budding skippers were once thrown the keys at boat shows and tossed in the deep end, the major marine players now offer free membership to brand-loyal clubs hosting events variously billed as rallies, regattas, musters, escapes and experiences.

For the boatbuilders and retailers, regattas are a sneaky form of experiential marketing where, quite by design, the next biggest boat is often berthed alongside. But for owners, it's all about good cheer. Here are some of the on-water soirees from the big names in boating. Fly the flag and get aboard.

BENETEAU: The first yacht brand to stage an owner's regatta is French Beneteau. Run in conjunction with the French Chamber of Commerce, the Peugeot Regatta and Beneteau Cup have been staged on Sydney Harbour for the past 16 years. A fleet of around 45 yachts partakes in competitive racing, entertainment and champagne on day one, with the next day focussed more on casual sailing for family, friends and members of French community. There is also the Mettle Mesh Cup on Pittwater each year, the Beneteau Bugle in South Australia, Beneteau Bell in Brisbane, and Beneteau regattas in Perth and Melbourne that attract interstate teams. As many as a quarter of the yachts at Hamilton Island Race Week are Beneteaus, hence the owners' functions and dedicated land base during that event. (For details, visit www.beneteau.com.au).

GRAND BANKS: When Riviera, Australia's biggest boatbuilder, became the local agent for Grand Banks in mid-2007, pre-existing Grand Banks owners jumped at the opportunity to join a rally. Twenty-one boats ranging from timber beauties like the 32 and 36 Classics from the early 1970s to the present-day craft, including the 47 Heritage and Eastbay, made for an impressive showing last year. Amazingly, this gathering of Grand Banks, which headed for Peats Bite for a nautical nosh up, was the biggest outside North America. The conga line of boats proceeded at a stately pace along the mighty Hawkesbury River. Anchors were dispatched in just a few metres of water in Sunny Bite and a long lunch ensued. But the food is just part of the attraction of Peat's Bite. Entertainment by way of keyboard and vocals come courtesy of the owners. Future events to the Hawkesbury and Port Stephens are on hold for now. (More from RMarine Pittwater, visit www.rmarinepittwater.com.au).

HALVORSEN: The Halvorsen Club is typical of many brand-loyal clubs formed for various classes of out-of-production and classic yachts. There are 120 members and as many boats Australia-wide, with some 30-odd timber beauties in Pittwater, 25 up the Hawkesbury River and 30 on the harbour. The club stages about four social raft-ups a year, including a weekend on Pittwater last month. There is also a technical day with a shipwright or mechanic answering questions about everything from paint and varnish to bright work and hull bottoms. Social raft ups include cruises to Hawkesbury River and the Colo on occasion. Sailpasts have been held on Sydney Harbour before along with displays at the Wooden Boat Festival and the Wooden Boat Show in Pittwater. A website is being set-up as we speak. (See www.tradeaboat.com.au for video footage).

HANSE: Out of the doom and gloom comes the Hanse Regatta on Pittwater, attracting a record 33 yachts last month on a day with two fun-filled races punctuated by a long lunch at anchor off Hungry Beach with German refreshments. There was a prize-giving function with 130 people held at the Royal Motor Yacht Club at Newport and prize of an all-expenses trip to Lord Howe Island. The regatta is an annual event, with trips also planned to Port Stephens. Cruise in company and learn the ropes with the expanding German family of yachts. (See our footage online at www.tradeboat.com.au).

MARITIMO: The Maritimo Muster is a relatively new concept from the eponymous Australian luxury boatbuilder designed to introduce new owners and reintroduce seasoned skippers to the joys of Queensland cruising. The event kicked off two years ago with just five boats. Given the great support, rapport and rollicking time had by the 15 loyal owners and their crews in the ’08 Muster, the event is now a firm fixture on the company's cruising calendar. The chummy 15-day escorted cruise from Maritimo's Hope Island offices on the Gold Coast north to the Whitsundays and beyond, is an opportunity to assess its purpose-built cruising boats in the environment for which they were designed. It is also a valuable aftermarket service and value-added experience. But for owners, it's an opportunity to shakedown their boats and visit some of the country's premier power-cruising grounds. The planned Maritimo Muster to Tasmania has been put on hold. (Read all about last year's Muster at www.tradeboat.com.au).

MUSTANG: A fleet of some 30-odd Mustangs moseyed across the Broadwater into Couran Cove on South Stradbroke Island late last year for the Mustang Escape, the first owner's get together since the Queensland boatbuilder went into receivership in late 2007 and was subsequently bought by the Standard Bank of South Africa. Mustang sales outlets from New Zealand to WA also stage Escapes, with the new Sydney offices at The Spit saying they are looking at staging an owner's event after Sydney boat show. (More at www.mustrangemarine.com.au)

PRINCESS: "These days people are buying a whole lifestyle experience, they are not just buying a boat," explains Stephen Milne, head of marketing at Riviera, which also represents the UK-made Princess boats in Australia. "And by travelling in convoy to places like Hamilton Island, under the tutelage of an experienced navigator and captain on a lead boat, they gain the confidence to eventually go for it alone." Closer to home, RMarine Sydney has staged a number of experiences for Princess owners and there are plans for a spring event to tie in with the Riviera Experience. (More at www.rmarinesydney.com.au).

RIVIERA: Riviera stages its so-called Experiences for boat owners in all states and across the ditch in New Zealand, where last month a three-day fishing tournament attracted 17 craft and 85 anglers. In Sydney, there have been harbour experiences, trips to Pittwater where aqua-stages have been set up, rallies along the Hawkesbury, and to Port Stephens and Lake Macquarie. But none could hold a candle to the Pirate Experience where boats descended on Refuge Bay, participants boarded a ferry and were transferred to the James Craig tall ship for an offshore sailing experience and dinner date. Meantime, the Coomera-based Queensland Riviera dealer Keith Hanson headed north just weeks ago to Lady Musgrave Island on a 10-day odyssey with 23 boats valued at $22 million and about 100 people in tow. Some 10 of them will continue to Airlie Beach for the 14-day Whitsundays Experience. Last month in WA, 17 Rivieras and 70 people voyaged to Port Geographe in WA. Trips to Rottnest Island and Mindarie are planned. Twenty-eight boats and 106 Croweaters travelled to Kangaroo Island in April for a five-day Riviera Experience. An event is in the pipeline for Sydney for the start of the season. (More at www.rmarinesydney.com.au).

SEARAY: Serene Sugarloaf Bay in Middle Harbour was the setting for the SeaRay Rendezvous in February, where 27 of the popular American-made cruisers from 24 to 60ft converged from Pittwater to Port Hacking and rafted to create an amphitheatre for a weekend of family fun. Kids were kept busy on large floating trampolines and with organised activities, while owners enjoyed informative presentations by NSW Maritime, Cummins Marine Diesel and Mercury Marine representatives. On Sunday morning, crews woke to find the papers had been delivered. A big barbie lunch was then forthcoming. Other rendezvous have been staged on Rodd Island in Iron Cove and Port Hacking, including the Aquapalooza (www.aquapalooza.com), which is billed as the world's biggest boat party, run in June concurrently by SeaRay dealerships in other States and around the world. Last year, the event attracted 10,000 boats and some 30,000 guests worldwide across 120 venues. (More at www.searay.com).

SEAWIND: The Wollongong-based catamaran company is enjoying a surge of interest in its efficient cruising craft. Owners tend to be real enthusiasts who enjoy getting together and going places. Regattas are popular, with Jervis Bay on May 10, Whitsundays with island racing and parties from June 20 to 27, Pittwater on October 31 with a marquee and party at The Basin, and Moreton Bay on November 15. (Details at www.seawindcats.com).

WHITTLEY: If you prefer your boats trailerable and enjoy cruising in company then consider a Whittley. There are independent owners’ clubs based in NSW, Melbourne and Qld. The local branch is often seen with boats rafted up in Cowan Creek, Middle Harbour and Port Hacking. Other times, they hitch them up and hit the highway, heading for the Whitsundays and beyond. (See www.whittleyclubnsw.com for news, pics and rally reports).