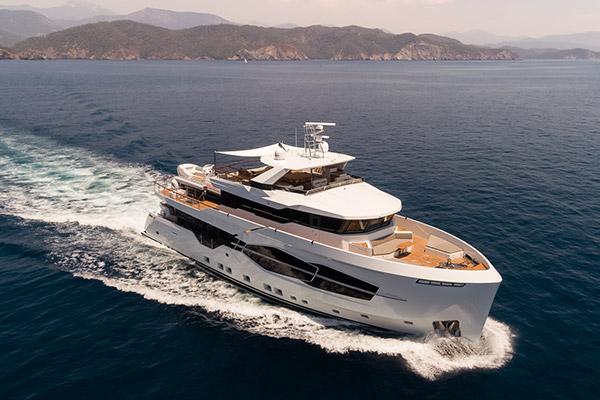 The award, which was announced at a ceremony in Singapore, is given to the best yacht launched in the past year that offers the ability to be self-sufficient in remote areas for extended periods of time.

Named M/Y Marla, this 32.5-metre superyacht is the first unit of the new 32XP Series. Standout features include high-tech noise and vibration suppression for silent sailing as well as an efficient displacement steel hull for maximum versatility. Able to reach a maximum speed of 14kt, the M/Y Marla can accommodate up to 12 guests in comfort.

Paul Miletta, a Numarine expert and director of Q7 Marine in Sydney, says the 32XP’s spacious interior and distinctive lines are added bonuses to a highly-capable foundation.

“Its greatest appeal is the technology behind the vessel. The award-winning underwater dynamics, its obvious good looks and sound technology – it’s just a fully loaded offer,” said Miletta.

The 32XP boasts over 330 square metres of living space, extensive storage space and high fuel and water capacity for longer voyages, making it a compact explorer yacht that aims for functionality and style.

This mission has resulted in an exterior that Numarine describes as “deliberately rugged, powerful and hefty” to match its level of capability. Meanwhile, the interior of the 32XP is fully customised to reflect the owner’s layout, fabric, material and design preferences. Regardless of how it’s arranged, below deck is a modern and spacious layout that offers two mid-ship VIP Cabins and a pair of double cabins (all with ensuite bathrooms) along with over 85 square metres of living space.

The main deck of the 32XP has a generous cockpit and a comfortable stern sunpad area behind the couch seating, creating 64 square metres of living space (including side passages). An expansive 48-square metre saloon leads to a lobby area with a day head and a separate gym on the starboard side, and then to a full-beam forward master cabin with more than 30 square metres of space - plus separate his-and-her bathrooms that share a generous central shower.

Meanwhile, on the upper deck is an expansive 40-square metre owner’s cabin with a walk-in closet and a bathroom, which opens up to an impressively-large upper deck. Forward of the wheelhouse is a large couch area with bimini and cocktail table, as well as two sunpad areas.

The second and third hulls of the 32XP series were sold after delivery of the M/Y Marla and both will be launched this year.

The Numarine 32XP featured in issue #506 of Trade-a-Boat magazine. Subscribe today for all the latest boat news, reviews and travel inspiration.