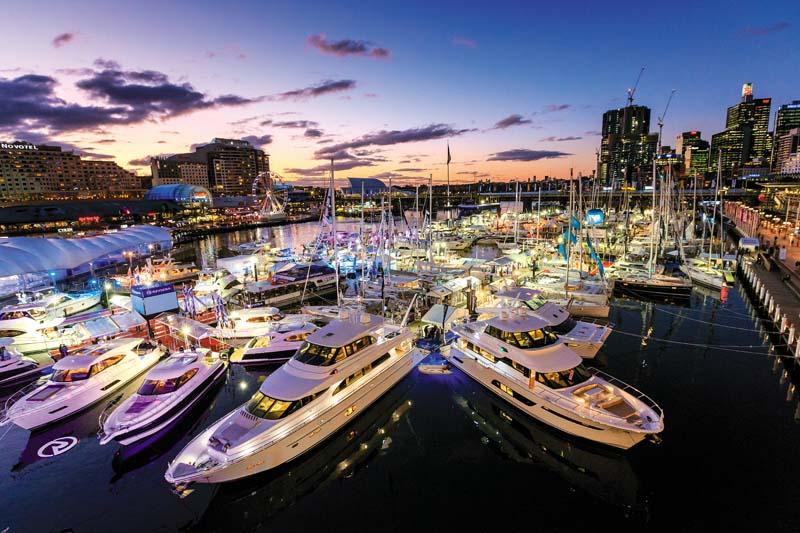 The 2016 Sydney International Boat Show (SIBS) marks the last split over two locations for the event. For the last few years, the Sydney Boat Show has been running two exhibitor spaces: the traditional Cockle Bay on-water displays; and a temporary hall on nearby Glebe Island. The event team have excelled at minimising concerns in getting between the locations, marketing to the public and in supporting exhibitors get the best of it but it has never been the same as the single location.

Next year is a milestone with the 2016 Sydney Boat Show being one of the first major events to make the most of the then completed, new exhibition centre adjacent to Cockle Bay. Follow us as we run through the boats on display as well as all the gear and gadgets that we are most excited to see.

The 2016 Sydney International Boat Show will see two new models in the Arvor boats range. The 25ft shaft-driven Arvor 810 Diesel will be displayed in Australia for the first time and will be joined by the luxurious Arvor 755 Weekender, following its successful launch in Sanctuary Cove.
The flagship Arvor 855 Weekender will again be a prominent display after a hugely popular launch at the 2015 Show. All up, there will be seven vessels on display from the Arvor Diesel, Sportsfish and Weekender ranges.

Included in the Beneteau Yachts and Powerboats display are four brand new models, not seen on the water previously in Australia. The new Beneteau Oceanis 41.1 and the Oceanis 60 will sit alongside the award-winning Oceanis 38, Oceanis 48 and Oceanis 35.
The Gran Turismo 40 is similiar to a larger superyacht with the use of leather trims and soft furnishing throughout the boat.The Swift Trawler 30 will make her Australian debut. The latest generation in the range, the 30S builds on the range’s popularity and reputation as a stylish seaworthy trawler.

This year Boston Whaler will be releasing three new models, all Australian premieres. The 230 Outrage is offshore excellence in a towable package.
The 320 Vantage is the ultimate dual-console with host of features and a 2015 innovation award winner. The 350 Outrage is an awesome offshore centre console with triple 350hp engines. It will also have a range of other unsinkable legends, like the 345 Conquest, Dauntless and Super Sport ranges on display.

Chapman Marine Group will have three brand new Sea Ray releases at the Sydney Boat Show from its new SLX series. The new releases are the Sea Ray 230 SLX, the 250 SLX, and the 280 SLX.
It will also be showcasing other brands at the show, including the Beneteau Outboard Series, Wellcraft’s 35 Scarab Offshore and 23 Scarab Offshore, as well as Formula’s 310 FX. Mark Chapman, managing director of Chapman Marine Group said that they are all new, fresh and exciting.

This year Fleming Yachts celebrate their 30th anniversary of their first boat being launched in Taiwan.
Fleming is displaying a Fleming 55 – the 55 has not changed during these 30 years, a convincing testimony to the model still being produced today. There are now over 300 Fleming yachts world-wide. Apart from the 55, Fleming also builds 58s, 65s and 78, all of equal timeless design and built like a passage-maker should be!

World renowned for their exceptional radar technology, Furuno now has a game changer with the release of their all new compact DRS4D-NXT radar. The NXT is a Solid-State Radar with pulse compression and Doppler frequency shift sensing technology, providing the performance of an open array system in a compact 24in radome.
This “NXT” (read “next”) generation Radar is designed for use with both NavNet TZtouch and TZtouch2 MFDs and the DRS4D-NXT is packed with new features.

GME will be displaying the all-new GME GX750 Black Box VHF Marine Radio – an entirely new design concept.
The GX750’s unique Black Box concept provides all the functionality of a conventional fixed-mount VHF Marine Radio in the palm of your hand with the supplied full-function LCD Controller Microphone with large backlit display. The GX750 is available with a White or Black LCD Controller Microphone to suit contemporary vessel interiors.

This year, Good Times Marine are only taking two brands, Mercury and Haines Signature, with huge discounts across the range. The models that will be showcased are: 525F, 535BR, 543SF, the all new 550F, 580BR, 600C and 650F. Each model offers the end user a different on water experience, from the fast, stylish, functional and luxurious bowriders, to the tough, go anywhere fishing packages and family all-rounders / cruisers. Each Haines Signature will be teamed with a Mercury outboard and a three-plus-two year warranty.

Marine industry icon, The Haines Group, are excited to once again show-off a great cross section of its quality, award winning products at this year’s Sydney International Boat Show.
As the world’s biggest private distributor of the award-winning Suzuki Marine outboard motors, visitors to the show will certainly be spoilt for choice. Its dealers will have the latest Suzuki DF4A/5A/6A motors on display. This will also be your chance to see the newest member of the Signature Boats family, as Haines Signature debuts the 550F in Sydney.

Integrity Motor Yachts will present their biggest range of boats ever displayed at the Sydney International Boat Show. Leading the display will be the flagship and most recent release for the brand, the 490 Grand Sedan. Alongside will be the very latest 440 Sedan, one of the most popular models in the extensive Integrity range. Rounding out the display will be the entry-level 320 Express, which features a large forward cabin with queen bed along with shower and toilet.

Maritimo will have a large on water display at this month’s Sydney International Boat Show with seven vessels featured including the newly released M61 cruising motoryacht.
The M61 had its world debut at the Sanctuary Cove International Boat Show in May and already six vessels have been sold. “We were very confident this boat would strike a chord with the boat buying public and this has proven to be the case,” said Maritimo’s sales and marketing manager, Greg Haines.

Matthew Willett Marine has six boats on display on the marina ranging from the ever-popular Jeanneau Merry Fisher 695 through to the impressive Prestige 500 flybridge. Jeanneau have announced their new models for 2017. The new releases include the range-topping Merry Fisher 895 (replacing the current 855) and the 795 Marlin. New to the Leader range will be the Leader 29 which joins the recently restyled Leader 36 and the Cap Camarat new flagship, the recently launched 10.5 Walk Around.

Multihull Central will be showing four boats at the Show. Aquila, built by Sino Eagle Yacht Company, is a fusion of European, American and Asian innovation and includes 38ft, 44ft and 48ft models. The Outremer 45 is a true blue water cruiser, purpose built for sailing the world’s oceans in comfort and safety.
The Seawind 1250 is purpose built and tested for serious blue water cruising within our southern oceans. The new Seawind 1160 LITE features twin 20-25hp outboards, lighter and newly styled fitout, larger hardtop for solar panels.

Showcasing a host of exciting new products and features, Raymarine is exhibiting on the Marina and in the Hall at the Sydney International Boat Show this year.
Compatible with all current Raymarine multi-function devices and available for free download from the Raymarine.com.au website is the latest release (version R17) of Raymarine’s Lighthouse II Software. Also on display, at is the Ocean Scout TK hand-held thermal camera.
Raymarine, through its participating dealers, is also offering some fantastic packages on the award winning Dragonfly series of fish finders and GPS units.

Australian luxury motor yacht builder Riviera is preparing to roll out the red carpet for visitors to its on-water luxury showcase at the Show.
The internationally acclaimed marque is inviting Riviera owners and enthusiasts to visit Darling Harbour and step aboard its latest luxurious designs in what will truly be a beacon of boating excellence. The Riviera 4800 Sport Yacht – with two spacious staterooms and two bathrooms – boasts a multitude of features and proudly takes key design cues from the extremely popular Riviera 6000 and new 5400 models.

Sirocco Marine South will have the full array of it brands, dealers and VIPs out in force, occupying over 400sqm in the Pavilion and a presence on-water.
Among the top five largest exhibitors this year, Sirocco Marine South’s hall display will have the entire range of BRIG RIBs on show, plus the latest Williams, Sealegs and Sirocco models, as well as boats from the Boston Whaler brand on the marina – meaning there’s something for every application, preference and budget.

As the first manufacturer of outboards in Japan, Tohatsu hit another milestone this year, celebrating 60 years of history. The first outboard produced in 1956, the OB-1B, was a big step forward in boating as it is today with the MFS50A four-stroke model.
As a manufacturer and distributor, Tohatsu are offering one of the most complete range on the market with conventional two-stroke from 3.5 to 90hp, direct injection two-stroke (TLDI) 40 to 115hp and four-stroke 3.5 to 250hp.

Being showcased for the first time in Sydney are Yamaha’s latest VMAX SHO models, with the new game-changing VF115 and VF150 joining the Australian-range.
Also debuting is Yamaha’s new-addition F90 four-stroke, the perfect option for savvy boaters looking to extract the maximum performance from their 90hp-rated trailer boat.
On display across the show is an array of Yamaha powered locally built and imported boats. Powering a number of these boats is Yamaha’s all-new light-weight F130A outboard motor.
Complementing the new Yamaha outboards engine range, is a new range of exclusive rigging.