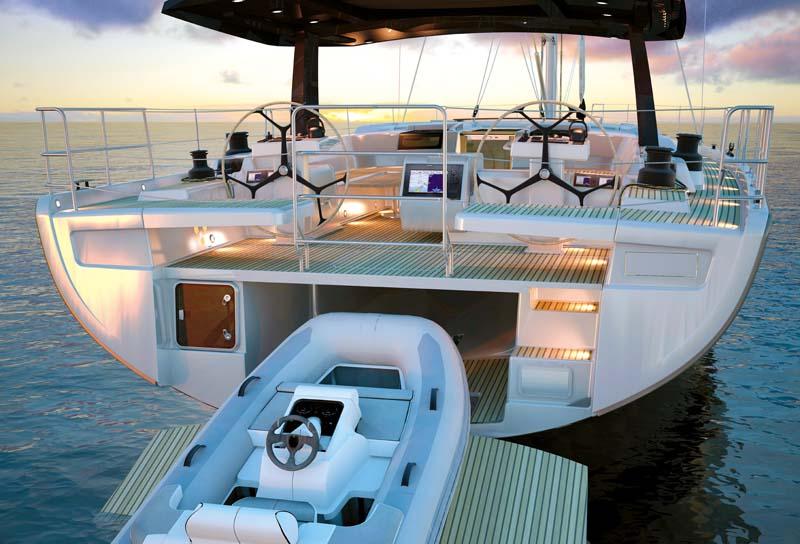 And the first 675 is ready to set sail in Australia and New Zealand; it’s being brought to Australia by the Windcraft Group.

Developed by leading designers Judel/Vrolijk & Co, the sporty cruiser comes equipped with Hanse’s signature self-tacking headsail and an uncluttered deck layout focused on an elongated teak foredeck and the flowing roofline. Inside, the boat is light-filled, thanks to large hull windows and a huge panoramic roof with an electronically controlled deck section.

The interior layout is a first for Hanse and offers owners and guests extra privacy thanks, to a separate crew entry on the port side of the cockpit, which leads to the galley and crew cabin plus the wet area.

In the bathrooms you’ll find circular showers finished with stainless steel and wood veneer, along with real stone surfaces to add to the luxury feel.

Design has been a high priority; in the large owners’ cabin the shelves and sideboards are mounted so they appear to float, while the saloon boasts a card table with screen that doubles as an office area, a coffee bar in the side wall and a temperature-controlled wine cooler.

Guests can relax in peace and quiet in the saloon with its state-of-the-art entertainment systems as the kitchen and utility areas have been separated from the main living area.

The cockpit has three 21-inch screens for entertainment or navigation, while handmade leather and wood panels give finishing touches rarely seen in a production yacht.