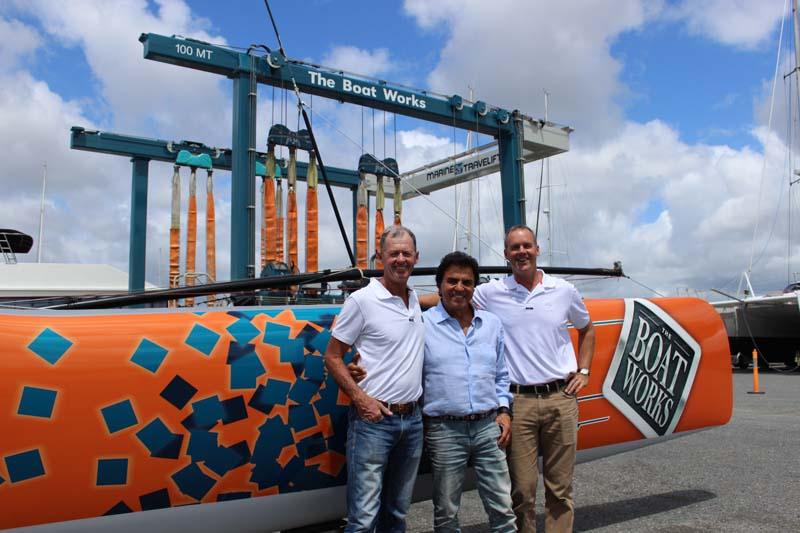 Three Queensland marine identities have teamed up to head a bid to bring the America’s Cup Down Under.

Tony Longhurst, former champion motor racer and waterskier, is CEO at The Boat Works in Coomera’s marine precinct; Rodney Longhurst is the owner and CEO at Riviera Australia, the highly-awarded motoryacht builder, also based at Coomera; and Steve Ackerie is CEO and founder of Stefan hair salons, and was Australian Offshore Powerboat champion six times. He also owns Stefan Boating World.

But they’re not entering a boat – they want to bring the tourism, media and branding bounty of the event to the Gold Coast.

“We want to pitch the Gold Coast as the ideal host city for a preliminary event in the lead-up to the 2020 America’s Cup,” Tony explained. “Hosting a preliminary would bring tourists to our region and capitalise on the momentum generated by the 2018 Commonwealth Games. We will have the infrastructure and we definitely have the natural attractions.

“Oman held the first round of the Louis Vuitton America’s Cup World Series in February and it brought it global attention,” Tony said. “The America’s Cup inspired the nation, attracted thousands of visitors and gave Oman the chance to showcase its culture.”

Rodney added that tourists would be lured to the Gold Coast for the America’s Cup by the bucket list of activities in Australia.

“There’s the Great Barrier Reef, the Whitsundays, the desert, as well as those quintessentially Australian experiences. It can be five-star or backpacking – that’s the beauty of the Gold Coast and Australia.”

Steve summed up: “The America’s Cup is world-class and it’s this fame and spotlight that follows wherever it travels that the Gold Coast can capture.”