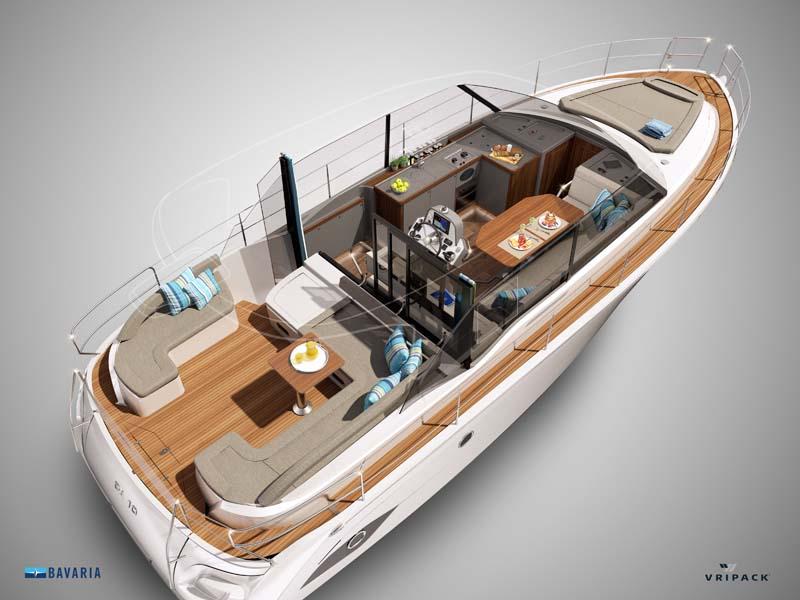 Similar in length and style to the Bavaria’s Virtess 420 Coupe/Flybridge, Bavaria as yet hasn’t said if the DA10 is a replacement or an addition to the Virtess range or a completely new variant.

Like the Virtess 420 though, the new 40-footer is available as a single-level Sedan or open Flybridge. But unlike its sister ship, the DA10 incorporates some notable and interesting design elements, including a semi-displacement hull with fuel-efficiency the prime directive, plus, unusually, a central helm setup that places the skipper at the back of the saloon.

Describing the DA10 concept as “revolutionary” Bavaria plans to launch the boat early next year following the announcement of the boat’s product name at the Düsseldorf Boat Show (from January 23 to 31).

“A classic contemporary design, a clever space concept and efficiency were the central themes of the first development steps,” said Bavaria.

Available in two or three-cabin versions, the owner’s stateroom remains forward in both. Bavaria says it has created more room to the aft (single or two-cabin) accommodation with a new engineroom layout. As mentioned, instead of a forward helm in the saloon Bavaria has opted to place it at the back of the room, with an L-shaped dinette to starboard abutting the forward bulkhead, opposite the L-shaped galley.

Bavaria says that as a semi-displacement motoryacht the DA10 is primarily designed for economical, safe and comfortable driving, and not for speed. As such there is a wide engine range offered, all Volvo Pentas owners can choose between 75 and 300hp powerplants.

“The body form, engine, gearing and propellers of the DA10 have already been thoroughly tested, optimised and tuned by computer simulations in a large series of experiments to ensure a fuel consumption that is as low as possible to ensure the protection of the natural resources,” Bavaria said.