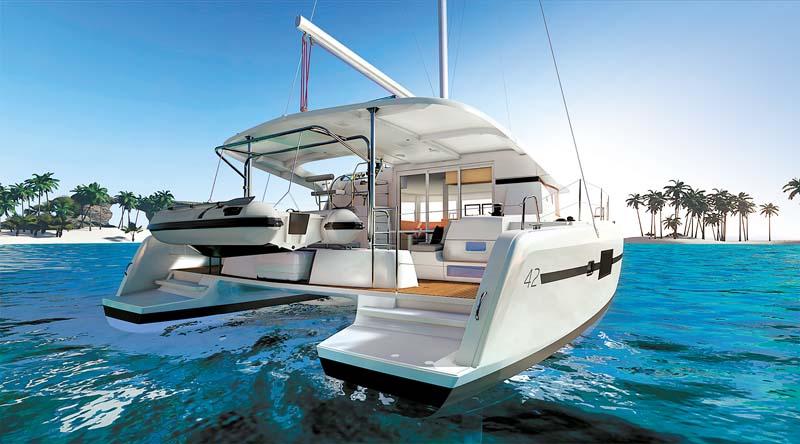 The ever-expanding Windcraft Group has a new division, The Multihill Group (TMG), which now imports of the popular Lagoon French-made power and sail catamarans.

The Multihill Group, headed by managing director John Cowpe, took over the local Lagoon distributorship on September 1 this year from Vicsail. The new dealership makes its Australian show premiere at next year’s Sanctuary Cove spectacular in May, with the 13.98m Lagoon 450 SporTop a definite starter.

Meanwhile, Cowpe is also looking farther afield to the 2016 Sydney boat show where the latest Lagoon 42 splashes down for the first time in Australia.

Announced at the recent Cannes Boat Show, the Lagoon 42 fits between the 400 and 450 F and S models, replacing the Lagoon 421, and makes it world debut at Düsseldorf International Boat Show this coming January.

Cowpe commenting on the new 42, said: “This has been under wraps for a long time, with thousands of development hours invested; as always Lagoon has had the best designers and interior experts onboard throughout.

“This new Lagoon 42 is seen to be leading the way in comfortable, ergonomically smart and easy sailing, and we are excited to be showcasing a 42 at the 2016 Sydney boat show,” he said.

With an exterior penned by French naval architects VPLP and an interior from Italy’s Nauta Design, the Lagoon 42 is available with three or four double cabins and is immediately identifiable as a Lagoon, but we’re told the similarity ends there.

Said to be a completely new design, the Lagoon 42 incorporates a host of smart features like single-level cockpit and saloon (the latter including a starboard aft galley), and a mast moved aft enhancing performance.

The Multihill Group says shifting the mast back offers advantages such as a self-tacking headie, a larger foretriangle for a greater choice of downwind sails, a shorter boom for easier manoeuvring, a mainsail that’s broader near the head, and a shift in weight to reduce pitching.

From the first 15 Lagoon 42 sailing cats that have been pre-ordered, The Multihill Group receives two. Pricing has yet to be officially announced but Trade-a-Boat understands the new Lagoon 42 price will be in the middle-to-high $700,000 range.