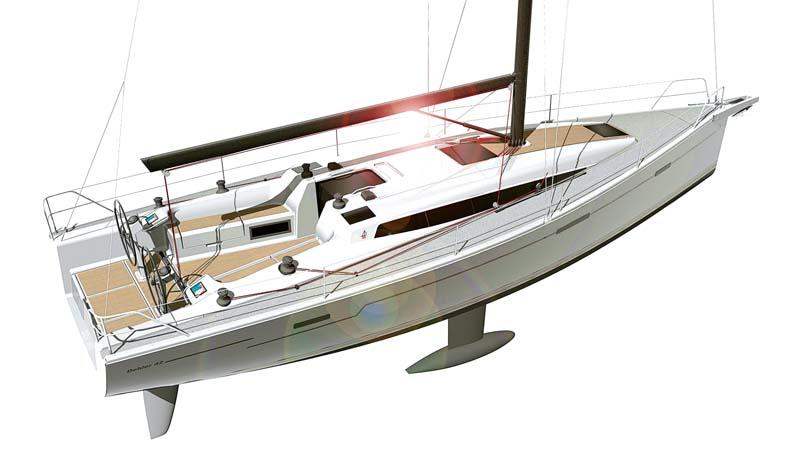 Due for launch early next year, the Dehler D42 is the latest of a six-boat Dehler sailing yacht range to incorporate new construction and design advancements. These include features like carbon reinforcement in the bottom of the hull and the patented Uni-Door for an instant-change to the head’s layout as found on the Dehler D38 and flagship Dehler D46.

A replacement for the 2012-model Dehler 41, the Judel/Vrolijk designed 12.82m Dehler D42, as with most yacht brands from parent company Hanse, can be customised with a wide range of options to suit the buyer’s lifestyle and preferences. In particular are a raft of options specifically designed for cruising and/or racing, including three keels, and a reduction in weight and increased sail area for those chasing dominance at the twilights or ocean racing.

Dehler dealership Team Windcraft, says buyers will warm to the spacious cockpit that terminates in a wide and flared transom. On deck are twin wheels, with teak advised for cruising as well as the large swimplatform with ladder, while for shallower anchorages the L-keel reduces draft from 2.15 to 1.98m.

Meanwhile for  those chasing high-performance and speed can select the optional lightweight carbon rig with a half-metre taller mast for a larger overall sail area of 99.5m² compared to the standard 93m². Reduced ballast and a lighter 2.4m-draft competition keel help shave 650kg off the racing Dehler D42 from the standard 9100kg overall weight.

Windcraft says the Dehler D42 has a vacuum-infused vinylester hull and foam core, with floor beams glued and laminated into the hull to distribute forces from the mast and keel, and supporting bulkheads bonded to the hull. The bottom structure is reinforced with high-rigidity carbon fibre, the Dehler Carbon Cage which we’re told is designed to carry more loads from the rig and able to withstand extreme shocks.

Below deck are two layouts, either two or three cabins with the owner’s in the forepeak of both. Dehler said the saloon has lounges either side of the drop-leaf table, good storage and either one or two wet areas. The Uni-Door is portside of the head and can isolate the entire area from the saloon or swivel to separate the washbasin area from the shower.

The first of the new ranges of Dehler 42 sailing yachts launches in January 2016. Scheduled for a premiere at the Boot 2016 boat show in Düsseldorf, Germany recommend base price is $435,000.