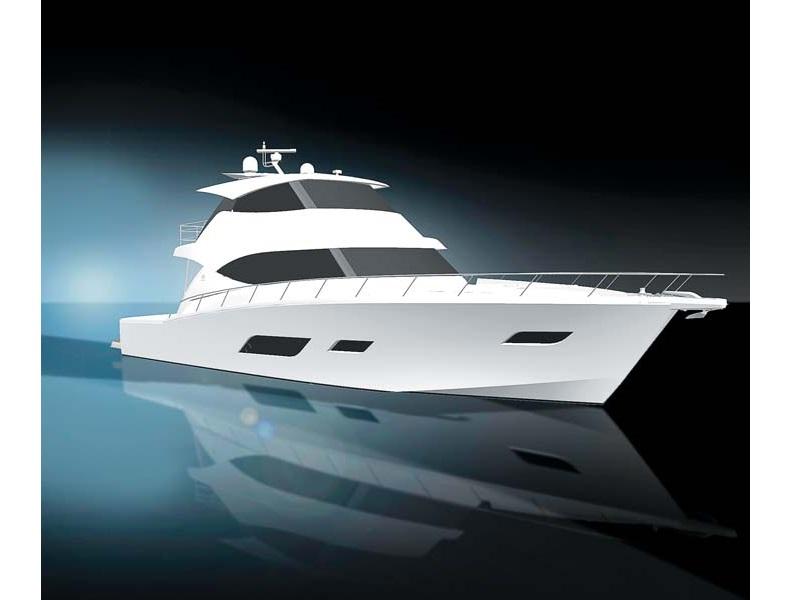 It’s the back end of the new Riviera 67 Sports Motor Yacht that Australia’s biggest luxury boatbuilder has focussed on with its new line of sports-oriented flybridge cruisers. A massive two-tiered cockpit and overhead a giant aft flybridge deck, both levels perfect for gamefishing spectators and entertainers alike.

The builder, this year’s Club Marine AIMEX Marine Industry Exporter of the Year, revealed the preliminary details of its new SMY range to the public during the recent Festival of Boating and Gold Coast International Marine Expo in May.

Describing the SMY concept as “a window to the future of Riviera”, company chairman and owner Rodney Longhurst added, “It is extremely exciting that we are charting a new course for Riviera that has for 35 years been a leader in design, luxury, technology and legendary blue-water sea-keeping performance.”

The first of the new Rivieras, the 67SMY (with an overall length of 75ft9in) is scheduled for a 2016 release and has seen the re-acquaintance of the Gold Coast yard with Dutch superyacht designer Frank Mulder. The naval architect’s extensive projects include the world’s fastest superyacht the 42m Millenium 140 The World is Not Enough (70kts), and the 67SMY his fourth design for Riviera, including two previous flagships the 2005-model 60EF and most recently the 70EF in 2009.

Generating 3100hp from twin MAN turbo-diesels, the 67SMY as mentioned features what Riviera describes as a “sports-sized” cockpit that is the hallmark of the boat’s alfresco lifestyle characteristics. The under-cover mezzanine deck is the focal point of the cockpit and features a dining and entertaining area with direct dayhead access, as well as connectivity to the central galley. Above, the well-equipped aft flybridge deck is a second and suitably appointed viewing and entertaining platform.

Wes Moxey, Riviera CEO said the new SMY’s “futuristic” enclosed flybridge is accessed via an internal staircase and has an “ultramodern” forward helm and the latest in marine technology and innovation.

Developing the new boat in consultation with Riviera owners, Moxey said: “This unique and pragmatic design offers fantastic interior flexibility … we feel our owners will appreciate the wide array of options to own a yacht with a uniquely personal touch.”

Moxey added Riviera has received encouraging feedback for the 67SMY with two of the new models ordered before the end of the 2015 Festival of Boating.