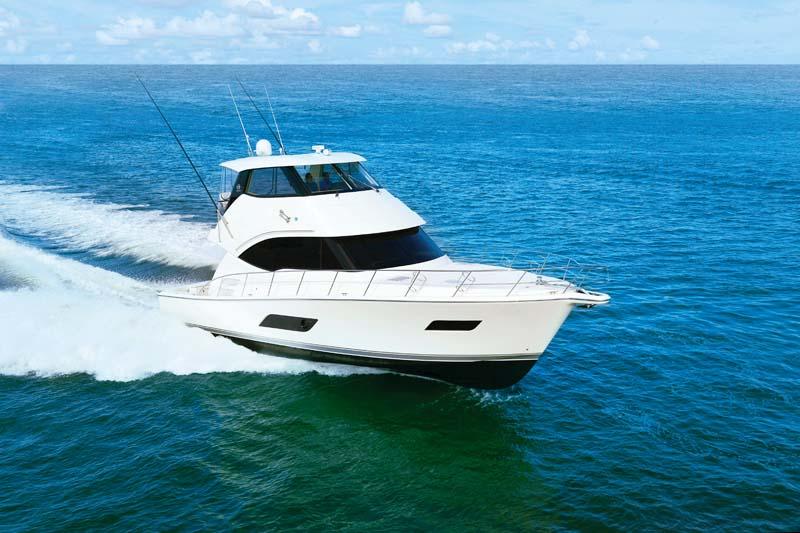 My, how times have changed. The first Riviera Enclosed Flybridge cruiser was the 52, launched way back in 1988 and of which only nine were ever built (including some Riviera 52 Open Flybridge models). Fast forward to 2015 and the 52 Enclosed Flybridge (above) is back sans the plastic clears that encased the top deck, and forward-facing pods replacing shaftdrives.

The new Riviera 52EF was one of three models – including a 525 SUV, 57 Enclosed Flybridge and a 67 Sports Motor Yacht – launched at the recent Riviera Festival of Boating on the Gold Coast, the three boats the icing of that $22.5 million display.

Riviera CEO Wes Moxey said the new Riviera 52EF is an “exciting example” of his company’s refinement and commitment to compete with the best global luxury brands, enhanced with builds under ISO and CE industry guidelines.

Moxey said the Riviera 52 Enclosed Flybridge design features a wide range of standard inclusions once considered optional upgrades, including glass cockpit navigation displays where up to three 17in screens can be fitted and CZone digital ship’s system monitoring and control takes the stress out of modern pleasureboating.

Riviera tells us there are a host of subtle refinements “from bowsprit to swimplatform” too, enhancing onboard liveability and luxury lifestyle pursuits. Among them a flexible accommodation plan comprising three staterooms and two bathrooms. The master cabin can be either portside or forward, the third cabin with full-size side-by-side bunks and plenty of storage.

The original Riviera 52 Enclosed Flybridge was powered by twin GMs delivering a total of 1100hp, the latest now punching 1450hp from twin Volvo Penta IPS2 950 D11 pod-drives (with joystick control), the IPS concept first adopted by the Coomera yard in 2008.

“The innovative joystick offers slow-speed manoeuvrability when backing up on a prize catch, in addition to precise docking. Indeed a skipper – either solo or with a novice crew – can simply push and twist the joystick to make the boat respond immediately, pivoting in place or crabbing sideways into a berth that’s just long enough to fit the vessel,” he said.