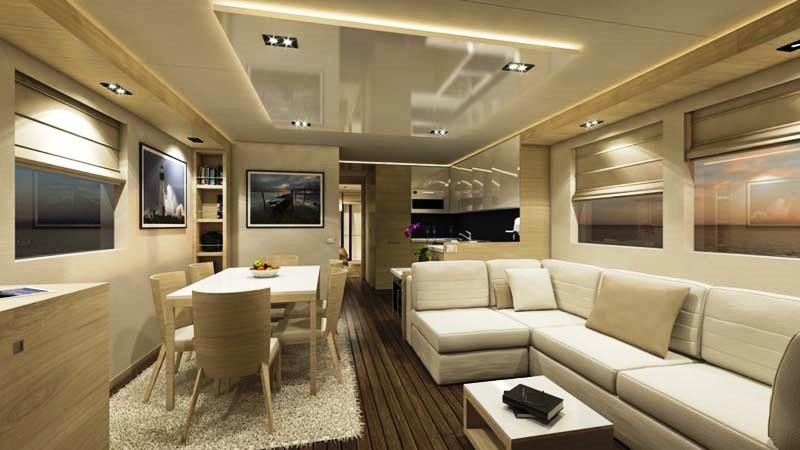 Houseboats are a great way to cater for a crowd on our inland waterways with their massive homelike dimensions and space, but how about an offshore version with long-range capability, rough-weather classification and luxury designer living too?

Sounds crazy, hey, all that windage for starters, but that concept is presently being offered to the Australian recreational boating market by the Italian yard Overblue, based at Ravenna on the north Adriatic coast.

There is no denying these catamaran-hulled powerboats feature a quality build and latest in stylish Euro exterior and interior design. And while it is difficult to imagine them anything other than an upmarket houseboat, they are still a cruiser beneath that bulky superstructure.

With a couple of boats in-build, Overblue creates a monocoque shell through modular construction, utilising the same moulds to increase the length of its three-model houseboat range from 44 to 64ft.

The entry-level Overblue 44 houseboat will be the first of the marque up for public display, making a world premiere at the Cannes International Boat Show in September. The builder says this houseboat craft has the specifications of a similar-length monohull but with twin-hull and small-engine efficiencies.

The Overblue 44 (OB44) houseboat has an overall length of 13.5m, a beam of 4.2m and twin 75hp engines said to deliver a top speed of 16kts, while economical cruising is claimed to deliver 1000 miles from a 400lt fuel supply. On top of that is a standard CE category B certification (C is optional), meaning this boat will handle winds exceeding Force 8 (33 to 40kts) and wave heights of 4m.

Both the Overblue OB44 and Overblue OB54 (which is also under construction) share similar features. Starting from the top is a giant flybridge entertainment deck with forward lounge area and tender storage, aft alfresco dinette and a central wetbar abaft a starboard helm module beneath a solar-panelled or retractable-cloth sunroof T-top.

Moulded starboardside stairs lead down to the single-level maindeck and covered cockpit with L-shaped portside lounge and table. Saloon doors enter a spacious interior with deep picture windows and where a variety of layouts cater for family boating, charter or liveaboarding. The forward master stateroom is common to all floorplans and here a cover on the blunt bow lifts to add extra air and light through a two-panel sliding door.

Quite amazing really, but with only a flybridge helm on these two models, driving will be a fair-weather affair only, the Overblue OB64 the only one of the three with an enclosed flybridge.