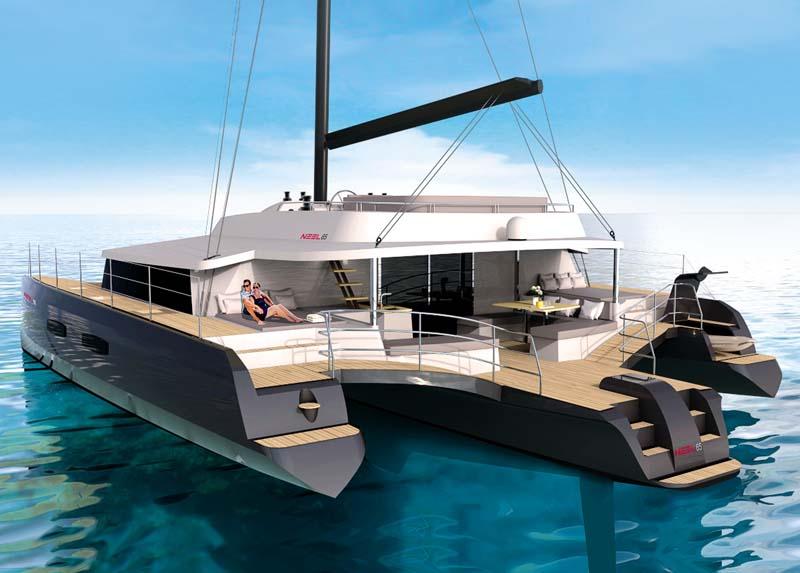 Neel says its 65 will be the world’s largest production cruising trimaran.

Yes, you’ll need a big berth for the latest concept from Neel Trimarans when it unveils the world’s largest production-built cruising trimaran, the Neel 65, at the Cannes Yachting Festival in September.

The six-cabin multihull, boasting a beam of almost 40ft, is the flagship model of the French-based builder’s two-boat range that includes the Neel 45. The Neel 65 supersedes the Neel 60 and is said to build on the attributes of its predecessor to deliver a multihull that “redefines standards of comfort, offshore performance and innovation”.

The Neel 65’s design features 110m² (1200ft²) of living space with two of its six double cabins on the same level as the designer saloon and open-plan galley. An additional two cabins are located in the central hull plus one cabin in each of the floats. And there’s no disputing the “optimal convenience” of six bathrooms.

Distributor, Multihull Solutions, says the practical layout includes an abundance of storage areas for long-term cruising, while the spacious interior and numerous relaxation areas all make the trimaran ideal for charter. In fact following its launch in Cannes the Neel 65 will sail to the Caribbean for crewed charter operations.

On deck there’s 25m² of cockpit to play and entertain on, incorporating an alfresco kitchen equipped for large-scale entertaining. Storage bins conceal all the toys and stuff in the skirts of the floats to facilitate easy access to the water, while the dinghy garage is positioned in the central hull.

The flybridge encompasses a 21m² area and obviously another placed aboard ideal for unwinding and taking in the sea views at rest or underway. Up here is a double helm, dining table for eight guests and convertible sunlounges.

According to Multihull Solutions, Neel Trimarans has enjoyed rapid success worldwide with its innovative designs, and has sold a number of Neel 45s into the Asia Pacific. The dealership’s Mark Elkington said he expected the Neel 65 will also be received well by Australian, New Zealand and South East Asian boat buyers.

“The new Neel 65 possesses all the hallmarks of the Neel range, including impressive width that delivers optimal stability, a PVC foam sandwich construction, and anti-collision partitions which make the trimarans unsinkable,” says Elkington. “The revolutionary fin system provides excellent protection for the hulls, rudder and propeller, while the main fin and two lateral fins allow the trimarans to explore or take refuge in very shallow bays that are inaccessible to other vessels, or even sail directly onto a ramp or a beach.”