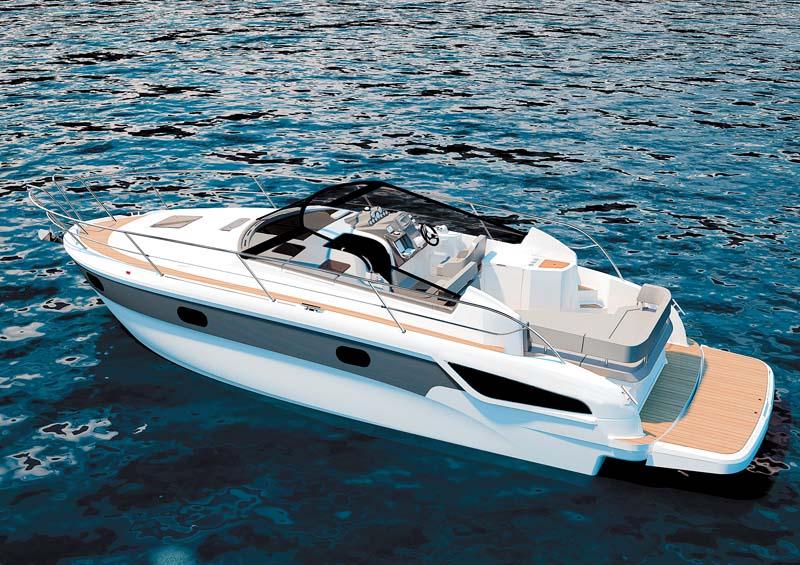 The two additions now join the Bavaria Sport 360, 400 and 450 in the new five-model line-up from 30 to 49ft, and complement the Sport 29 and 32 which Bavaria is keeping in production
for a period.

The Bavaria Sport 300 is the last of the revamped range to emerge from the drawing board and like its sisters is said to offer more space on and below decks. The most notable change is a larger reconfigured cockpit layout that now accommodates six (up one on the Bavaria S29) and a new helm-seating arrangement for passengers.

On the superseded Sport models, the cockpit design included a U-shaped dinette portside, opposite the helm, and a large sunlounge abaft. The new arrangement sees the aft sunlounge deleted and the dinette (which converts to a sunlounge with table lowered and infill) moved back to the transom, creating room for a two-person passenger helm seat alongside the skipper’s chair.

Below decks the layout follows the theme of the older models, with a separate aft owner’s double-berth cabin under the cockpit sole, a dinette in the forepeak that converts to a double, and these areas separated by a central portside galley and enclosed head opposite.

“The new Sport 300 fits perfectly into the existing Bavaria motoryacht product range with its large space in the cockpit and the cabins,” said Bavaria’s head of sales Meik Lessig.

“The Sport 300 is the logical continuation of this (new Sport) line of products and supplements the range with its concept and also perfectly complements the Sport 29.”

The Bavaria Sport 300 is available in two variants, the open deck 300 S and 300 Open with targa arch, while the 330 is available in S, Open and hardtop HT configurations. The bigger model Sports are in Open, HT and enclosed hardtop Coupe styles.