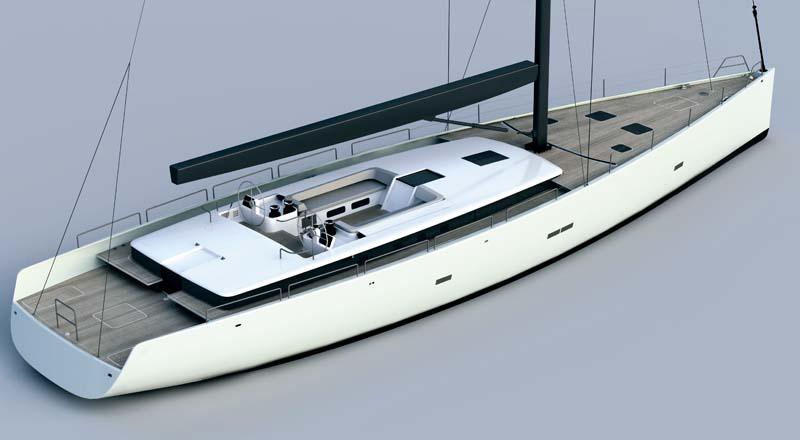 Michael Schmidt is back, and in no uncertain terms. The former founder of Germany’s Hanse Yachts has seemingly shunned those those value-for-money and popular sailing keelboats, and gone to the extreme end of the market with his latest project, the Brenta 80 DC centre cockpit sailing yacht.

After selling off Hanse in 2011, Schmidt spent three years sailing the world on a Hanse 630 and spurred his desire for a bigger, more luxurious yacht. He sought out Italian Lorenzo Argento from Brenta Design to draw him his vision, the end result an 80ft carbon-hulled super sloop.

Peter Hrones, managing director of Hanse importer Windcraft Group has had a long association with Schmidt, partnering in the 1990s to establish the Hanse brand in Australia, New Zealand and the Pacific.

To bring his Brenta venture Down Under, Schmidt has reconnected with Hrones, the pair liaising and ready to work together with potential new owners from initial design through to build completion.

Hrones sees the Brenta 80 DC bluewater sailing cruiser as a logical progression in Team Windcraft’s current offerings. “The Brenta 80 is a step up on the other brands we sell, both in terms of prestige and in size,” he said. “We have existing customers of yachts around and above 60 feet that we see the 80 appealing to as their next upgrade.”

Hrones says Schmidt sought a combination of stylistic elements of the past with new and modern concepts in the Brenta 80 DC. Notable design features include a three-level main deck with deep freeboard at the stern, rising to an almost flush foredeck. With a twin-wheel centre cockpit design that allows the boat to be sailed by a small crew, the owner’s aft cabin has exclusive rear access to the stern and is separate from the saloon area.

The yacht’s minimalist interior interpretation by Chipperfield was derived from his experience as a yachtsman. The interior aesthetics incorporate curved elements, indirect lighting and a palette of yellow and blue upholstery and dark varnished American walnut.

Hrones said simplicity was the main theme in the design of the light displacement yacht, onboard technology kept to a minimum, as well as the reliance on hydraulics.

As mentioned, the Brenta 80 DC is carbon-fibre built for increased durability and strength at significantly less weight. “It goes faster and farther than heavier boats of the same size, opening up an entirely new world of destination possibilities,” says Hrones.