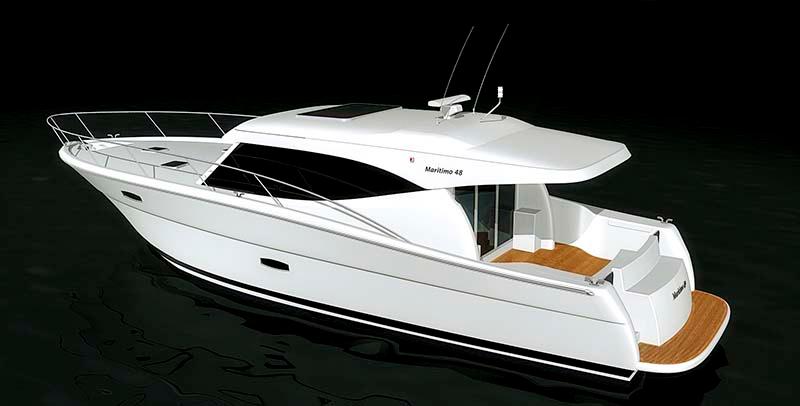 Interior cabin headroom is one of a number of new design initiatives employed by luxury boatbuilder Maritimo in its new S48 Sedan Motoryacht, due for launch this winter.

The Coomera-QLD based yard says it has ramped up production this year, Maritimo the S48 the third model to be released in 2015.

The Maritimo S48 will be officially unveiled midyear at the Sydney International Boat Show (July 30 to August 3) and expands the Sedan range to four, joining the Maritimo S58, S50 and S43 in the brand’s single-level express cruiser category.

The new Sedan follows the recent launces of the Maritimo M65 and M48 Cruising Motoryachts. Maritimo’s Greg Haines said the M65 has proved a hit with five already purchased, the yard hoping for similar success with the S48 (based upon the all-new M48), citing hull no.1 as already being sold to Europe and hull no.2 destined for Sydney.

“The new S48 is a magnificent boat and we believe it will strike a chord with boaties who want single-level living and either have bridges to navigate or don’t want the stairs associated with a flybridge,” said Haines. “It will hit the sweet spot for owners moving up from smaller vessels who are looking for all the facilities and benefits of our larger vessels in a more compact package with a starting price of $1.17 million.”

Haines said the Maritimo S48 features a full-beam master and an “innovative” tender garage where the transom and part of the aft cockpit lift on hydraulic actuators to reveal a large under-deck area for a tender and outboard plus watersports gear, or alternatively utilised as a big and easily accessible lazarette.

Also notable are walkaround decks ending at the front windscreen with a step-up to the gunwale-flush foredeck. The raising of the foredeck has created more headroom in the forward cabin and the second starboard cabin which can be configured with bunks or for use as a utility room.

“We have designed the front cabin in a way that provides a lot of space between the cabin door and the foot of the bed which gives guests a generous dressing area, something that is lacking in many boats of this size,” says Haines.

Unlike the rest of the Sedan range, the S48’s galley is now portside and the seating opposite has been moved farther aft, creating more room in the saloon for the provision of two “generous” settees, we’re told. Bi-fold saloon doors open to the cockpit and centre the aft galley as the focal point for entertaining.

Haines explained extensive customer research and focus groups were behind many of the innovations in the new S48 and M48, Maritimo taking onboard what owners wanted and their considerations of what works best.