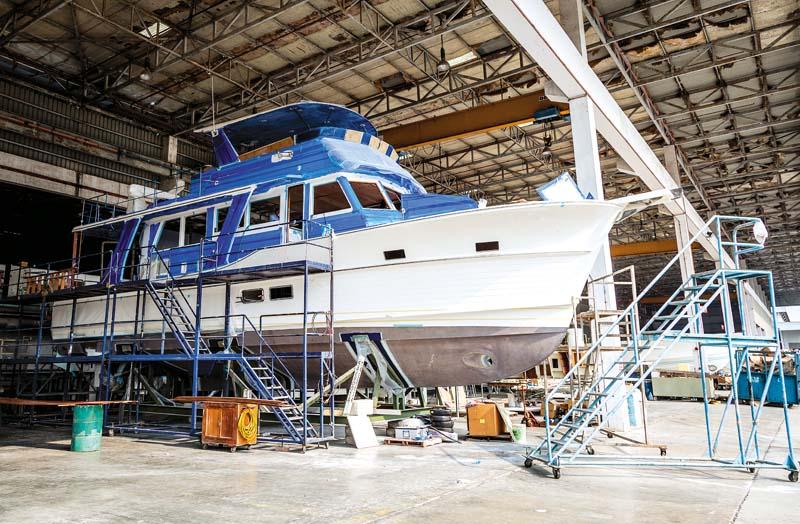 More than two dozen luxury boats expected to be built next financial year.

When Grand Banks acquired Palm Beach in April 2014, no one was quite sure what the merger would mean. Both brands were tracking nicely, with plenty of orders on the books, but there was savvy business thinking behind the plan, so it was clear this union would result in something special. We just had to wait.

Forward 12 months, and I’m standing amid the mammoth Grand Banks factory at Johor Bahru, Malaysia, a short drive across the bridge from Singapore.

Manager director Hank Compton has just explained the Grand Banks site takes in 15 hectares, and employs more than 380 people, so I’m trying to get my head around the sheer scale of this facility.

As we walk around the enormous plant, each shed unveils another expected surprise. In this one, a majestic blue-hulled EastBay 55; in another, hello, that’s a Palm Beach 65 hull.

And what’s this? It appears to be a 60ft Grand Banks superstructure, mated to a distinctive Palm Beach hull. Frankenstein luxury yachts? Hardly. But it’s becoming clearer just what’s going on around here.

Turns out a lot can happen in 12 months and with Mark Richards heading up the new-look company as CEO, you can bet they’ve been pretty busy in Johor Bahru. No less than two new models are already in build and Grand Banks recently signed off on an impressive nine sales from the Miami Boat Show.

But it’s what’s happening in terms of construction methods that is most intriguing. As Hank explained, a chief advantage of the merger is the ability to combine the intellectual property of Palm Beach, with the production scale of Grand Banks.

“We’ll finish building 20 boats in Malaysia this financial year and around 26 or 27 next year,” he said. “When you add in what’s still being built out of the PB Sydney factory, you’re looking at 30-plus boats delivered.”

What Mark Richards and his team have brought with them (quite literally – many Palm Beach employees have now moved to Johor Bahru) are the ultra-modern build techniques and exacting standards that have seen Palm Beach yachts win multiple Best In Show awards.

For example, all GB yachts will now feature the same composite interiors with wood veneer skins as used on Palm Beach builds. Besides stiffening the core of the boat, this also reduces weight considerably.

“All of the boats now will move towards this new build philosophy,” Hank said. “Our goal is to save at least 10 per cent in basic weight reduction. So on a boat like the Aleutian 55, that equates to almost three-and-a-half tonnes.”

Later that day, I also catch up with Mark Richards during one of his regular visits to the GB factory.

He said the two businesses had originally encompassed two totally different building concepts, but now these were coming together.

“The Palm Beach building process is something we’ve developed over 20 years and it’s worked very well,” he said.

“We’re really hitting our straps now, which is exciting, and we’re seeing the big benefits –we’re building boats efficiently and at a very high quality”

“With Grand Banks, the quality’s great and there’s a lot of skill here, but the technique was a long way behind what we were doing.

“So to be competitive, that needed to change.

“We’re not recreating – we already had the formula – we’re just applying it to their boats.”