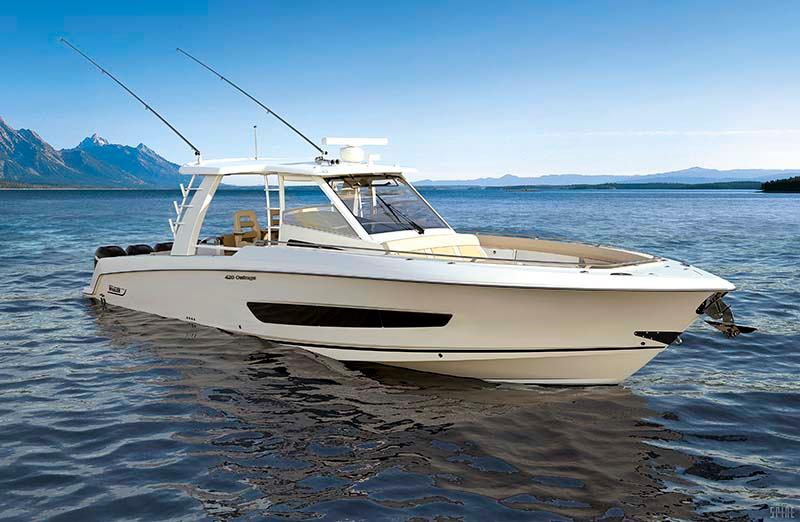 The ‘unsinkable’ Boston Whaler boats have a new leader of its hardtop centre console pack, the 42-foot-plus 420 Outrage flaunting not one, two or three outboards but four, with a recommended combined horsepower rating of 1200 to more than 1600.

Quad outboard motor setups are normally the domain of high-speed customised tourist RIBS, where this series of individual power units provides a level of redundancy and simplicity of maintenance. Now embraced by the popular American sportsfisher yard Boston Whaler, the four-outboard engine setup for the new Boston Whaler 420 Outrage is far from a pie-in-the-sky concept.

The word from recent American boat shows and locally is of genuine interest in this state-of-the-art luxury million-dollar sportsfishing boats. In fact, local Boston Whaler agent, Queensland Marine Centre’s Andrew Bennett said one has been sold here and he had organised a few inspections of the Boston Whaler 420 Outrage hull #1 at last weekend’s Miami International Boat Show. But with just one fishing boat on the water, a growing list of orders is pushing out delivery times to around a year.

The Boston Whaler 420 replaces the triple-outboard Boston Whaler 370 at the top of the Outrage range, now encompassing eight models, and features four 300hp Mercury Verado engines as standard. Initial reviewing Stateside report a top speed around 42kts, however four thirsty supercharged six-cylinder outboard engines at that pace restrict the range to only 190nm. At 27kts best cruise, the distance is said to jump to 290nm.

Over-the-top performance aside, the new Boston Whaler Outrage is more than just a super-blinged offshore fishing weapon. With a seemingly endless list of standard inclusions and features, the Boston Whaler 420 Outrage has the deck and interior space as well as the luxury to also serve as an entertainer, a weekender and family boat.

From stem to stern the new hardtop centre console flaunts luxurious comfort and entertainment zones plus the practicality required of its sportsfishing role.

Seating in the bow, under the hardtop and in the 5.1m² cockpit is innovative and varied, and serviced by an alfresco entertainment module with grill, sink and fridge. This unit also doubles as a bait prep area and includes one of two livewells.

The module-cum-leaning post has a forward flip-up three-people bench seat immediately behind the helm’s three bucket seats. With the skipper central, the two outboard seats are reversible to keep watch on trolling lines.

Below is a lofty interior with vee-berth, galley and separate bathroom.

We’ll be trying to get on this one, so watch this space.