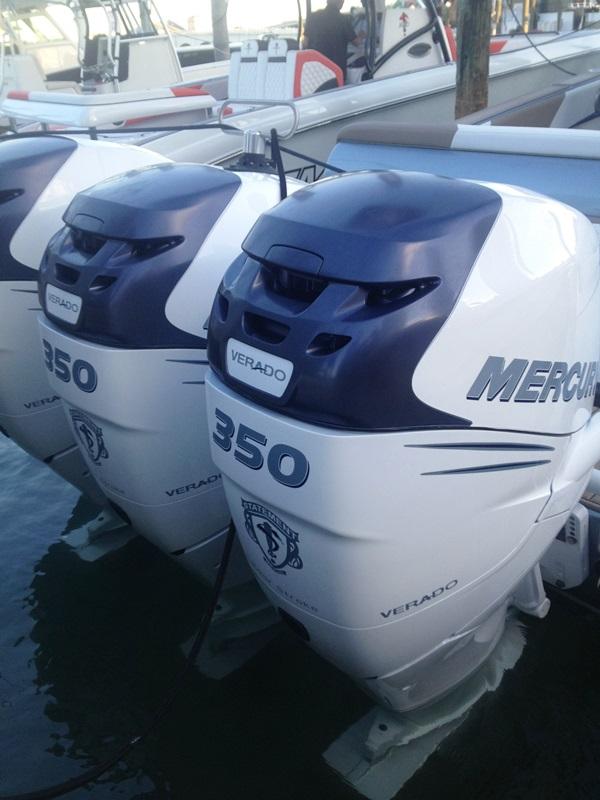 Trade-a-Boat is at the Miami International Boat Show. In addition to seeing lots of really, really big things (like the world’s largest outboard-powered centre console) and equally big marine engines, we got to witness the launch of four new Mercury engines.

This new Mercury engine is a much anticipated release that, until the actual outboard motor unveiling, had a degree of mystery to it.

Turns out, the new engine is a Mercury 350 Verado that uses the same six-cylinder, in-line, 2.6lt, super-charged block as the Mercury Verado 300 engine. It has water-cooled supercharger, dry weight is 303kg and according to Mercury, it’s “the fastest, lightest, most fuel-efficient and most durable 350 outboard that there is”. Watch this space for a full report from Trade-a-Boat’s engine expert, Andrew “Engine Man” Norton, who is at the Miami Boat show.

More information on the Verado 350 can be found: here.

Another exciting revelation was the unveiling of the Mercury Racing 400R outboard motor. You get not points for guessing what this engine is for: this beast of a motor is made for speed, speed performance and more speed.

Mercury described it as follows: “The 400R is a Verado but it’s a different Verado. It’s not your father’s Verado, this is the fastest Verado we’ve ever built.” It’s said to have the “best power-to-weight ratio of any outboard in the world” and is described as “the highest performing outboard in any category”.

The next Mercury engine to be announced was the QC4v 1550 sterndrive. QC4V stands for “quad-cam four-valve 1550 horsepower” and those familiar with these motors will recognise the model name as being a derivative of the Mercury QC4V engine platform.

The QC4v 1550 is an in-between marine engine aimed at filling the gap between the Mercury 1350hp recreational model and the 1650hp high performance racing engine. It comes with the turbo from the 1350,

The final engine to be revealed was the Mercury 4.5lt 200hp sterndrive, derived off the 250hp model. Watch this space for a full report.