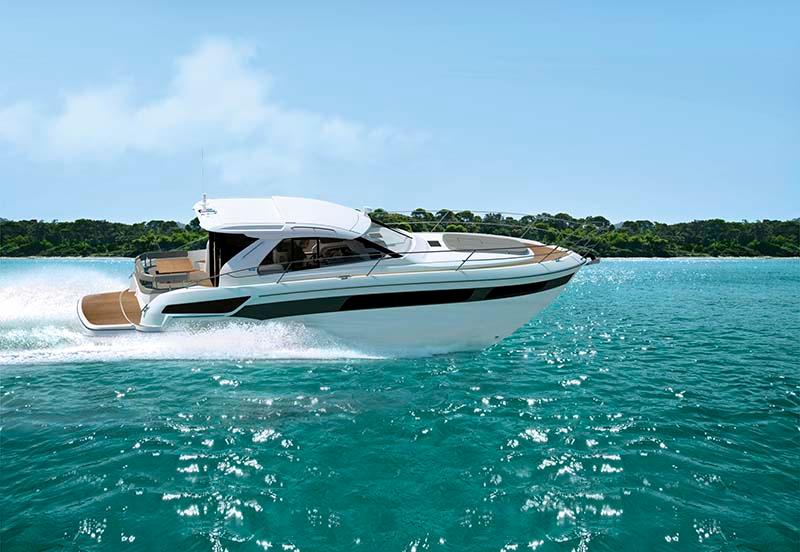 Bavaria Yachts has revitalised and redefined the design of its sportscruiser range of luxury powerboats, launching two new models: the Bavaria Sport 360 and Bavaria Sport 400 in the northern hemisphere this coming autumn boat-show season.

The Bavaria Sport fleet, from 29 to 45ft, will also now feature a Coupe variant. That means that each of the five boat length models are available in four different styles: Open, HT, ST and Coupe. The Open features a targa arch, the HT is a three-sided hardtop, the ST is a hardtop with a sliding canvas sunroof, while the new Coupe is an enclosed hardtop.

The two-cabin one-head S360 (pictured above) and S400 replace the Sport 35 and Sport 39 respectively.

Among the more newsworthy alterations is to the cockpit, nicely designed to enhance this area’s social aspects. The rear seating area with table on the S360 and S400 is ideal for alfresco dinner dates and sundowners, while during the day it can be converted into a large sunlounge.

The Sport 400 goes further with another forward couch area available via a flip of the back supports to join up with the portside sun bench on the opposite side of the steering wheel.

Local dealership Bavaria Australia told Trade-a-Boat the variability available in the cockpit alone would appeal to a tough local market already flush with an abundance of sportscruisers.

Bavaria says that in collaboration with its own team the 360 and 400’s exterior lines are courtesy of Marco Casali and his agency TOO DESIGN, while the hull form utilises the expertise of superyacht nautical architects Insenaval SL and the interior from Design Unlimited.

“We have analysed the needs of our customers along with our dealers around the world and incorporated them into the new S360,” said Bavaria’s Meik Lessig. “And to accommodate the many opportunities on a motoryacht without compromises was the key goal during the creation of the new S400.”

According to Bavaria, the S360 includes more ventilation and air in the saloon and cabins, and describes the S400’s owner’s cabin in the bow as akin to a suite, with guests enjoying the large VIP cabin aft of amidships.

Bavaria offers a variety of twin-engine options for both sportscruisers in either diesel or petrol from Mercury MerCruiser and Volvo Penta. Power ratings for the S360 range from 220 to 370hp and 260 to 430hp for the S400.