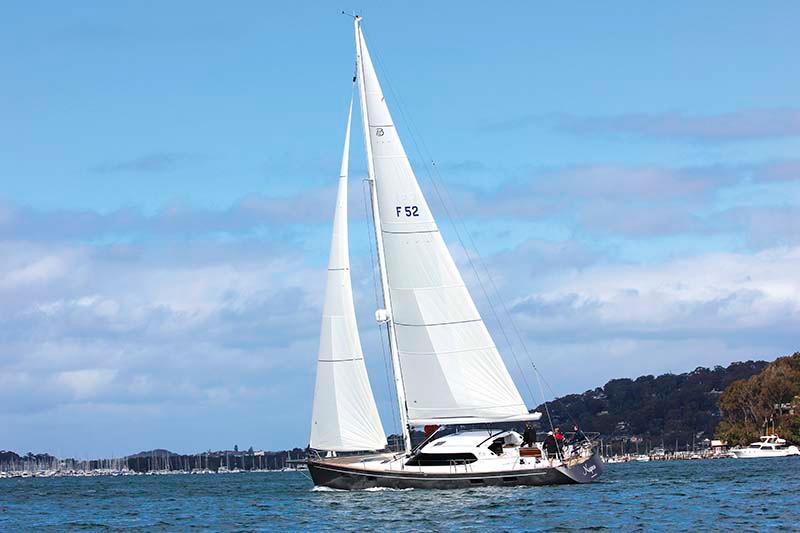 Buizen Yachts is the last remaining Aussie boatbuilder still turning out bespoke sailing vessels from its Terrey Hills factory. While it takes more than a year to complete each new Buizen sailboat, the reasons become clear upon inspection.

Having just sail-trialled no.3 sailboat hull of the 52ft range for a WA customer, hull no.4 is well underway, employing vacuum-infused vinylester resin during construction to create a true ocean-going yacht.

Given the inevitable evolution of sail boat layouts (and meeting the owner’s semi-custom needs) in the first two Buizen 52 builds, owner Steve Howe reports the team was extremely satisfied the latest hull no.3 Napea. This three cabin single level saloon design will now be replicated in subsequent 52 builds.

A clever “stable door” offers access to the saloon from the cockpit and this can be folded down on itself and the two bulkhead windows opened out, to allow interior ventilation and a connection between cockpit and saloon.

There’s a saloon helm station on starboard with unimpeded views for navigation, alongside a throttle, Raymarine joystick and engine monitors for when the weather is less than inviting. The yacht’s CZone digital systems are also controlled from here.

Down a couple of steps is the modern galley and the master cabin is forward, with en suite. Aft of the saloon, the starboard guest cabin is adjacent to a day head and an office adjoins the port cabin. The finish is akin to a modern superyacht and Buizen’s dedicated team has produced a world-class product that will safely carry committed owners around the world in comfort and with a high degree of style.

Riggers were still fine-tuning the Leisure Furl boom when we visited last month, so a sail trial was not possible, but the new 52 will prove slippery on the race course (and on passage) with its Hood sails, and self-tacking headsail.

Halyards and sheets are run through the decks back to Harken winches in the cockpit, where the skipper operates from twin consoles, each fitted with Raymarine instruments, full sail controls and sleek black wheels.

All sail operations such as raising, furling and trimming are hydraulically controlled from here at the touch of a button.

A glossy teak cockpit table can be folded away when not required, but it’s big enough to host elaborate meals under the folding bimini when the occasion demands.

There’s also underfloor access to the lazarette which holds a decent tender plus more room for gear and when this garage door is lowered, it creates a solid teak inlayed swim platform, accessed through a folding gate alongside the pushpit seating. This is truly Australia’s own pocket superyacht and Buizen Yachts has rightfully carved out on enviable reputation based on impeccable craftsmanship, which looks unlikely to change.

As Howe said: “We value our reputation, so we’ll never compromise what we do.”