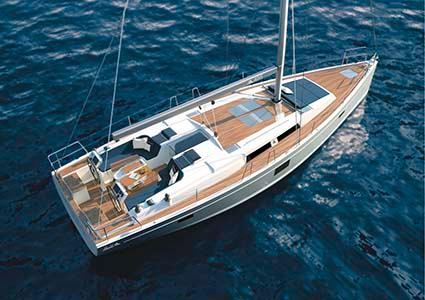 Claiming the largest cockpit in any 45-foot sail boat, Hanse also adds to the boat’s on-deck relaxation areas with the option of a 1.9 x 1.55m sunlounge in front of the mast on the forward coachroof.

With an obvious emphasis on outdoor relaxation and entertainment, the yacht’s 4.38m beam is carried well aft to maximise cockpit space. This area separates crowd from crew underway, the former relaxing on two large L-shaped lounges separated by a table, the latter aft on dedicated helm seats with twin steering pedestals (incorporating large pods for instruments and controls, and operating a single rudder) and halyard and sheet winches nearby.

The new Hanse 455 fits smack-bang in the middle of the brand’s nine-yacht fleet, from 31 to 78 feet and, like the rest of the boats, includes a self-tacking headsail designed for shorthanded sailing – the close proximity of the winches allows the steerer to operate all halyards and sheets.

The Hanse 455 has a total length of 13.95m and a waterline length of 12.2m. Two keel versions are available: the standard T-keel and L-shape keel, both with 2.25m draft, while the latter is also available as a shallow-draft option of 1.82m. A 53hp Volvo Penta D2-55 and saildrive is installed as standard.

The standard interior includes three cabins: two aft and a main cabin in the forepeak, but there is an extension option in the forward cabin area for two cabins to make a total of four which Hanse hopes will attract charter companies.

There is also a choice of two saloon layouts. A starboardside U-shaped dinette and an L-shape lounge opposite are standard, with the option of replacing the portside lounge with a small table and two swivelling chairs.

Meanwhile, the builder has ensured a flood of light and air throughout the interior with numerous portholes. Two heads are also standard; the forward cabin’s loo is portside against the saloon bulkhead with a separate shower stall opposite. The second head is located aft to port, adjacent to the galley and equipped with a partitioned-off shower.

Local distributor Team Windcraft said the new yacht has ample storage space. –the cockpit features a large storage locker under the benches and sole, as well as storage compartments for smaller items on the deck hatchway, plus a large sail locker in the bow which can be accessed from the deck.