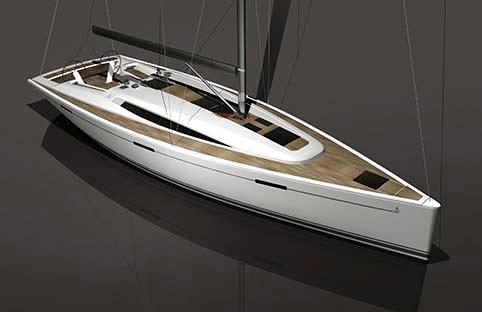 Check out the latest sailing Yachts from Dehler

A year on since launching the multi-award winning Dehler 38, the german sailboat maker has completed its six-model range with the introduction of the flagship Dehler 46 cruiser-racer.

The first hull of the new Dehler 46 is expected to splashdown in July and borrows several design cues from the 38, this year’s recently crowned Euro Yacht of the Year in the Performance Cruiser category.

With hull design by Judel/Vrolijk, the Dehler 46 has a total length of 14.4m, a waterline of 12.9m and a 4.35m beam. Three keel versions are available: a standard T-keel with 2.25m draft, a competition 2.7m T-keel and a 1.85m draft L-shape short keel. The boat also features two steering wheels and one rudder.

As mentioned the 46 adopts a number of details from the 38, such as the rounded roof structure, windows topped with an aluminium strip and the hull shape with a steep and wide stern.

Dehler said a wide range of options assist in transforming the yacht from a comfortable cruiser version to a competitive raceboat.

“The sporty attitude is underlined with a two-spreader mast positioned on the keel, absorbing the occurring loads optimally and distributing them over the entire bottom structure,” said Dehler. “The bottom structure is reinforced with carbon fibre, achieving an extremely high rigidity.”

Cockpit highlights include rounded design forms to the cockpit coaming achieving an ergonomic shape and good back support, while the open stern can be closed with a swimplatform and topped with a further option of a transom bench seat that doubles as a passerelle.

Below deck, the layout includes up to three “generously sized” cabins – including a 1.6m wide island berth in the forepeak – and two heads, the saloon equipped with a large U-shaped sofa, L-pantry and a navigation table.

One new design innovation of note is the use of the door in the two bathrooms. As can be seen in the photos hereabouts, it can either separate the entire head from the saloon or just close off the toilet and shower.