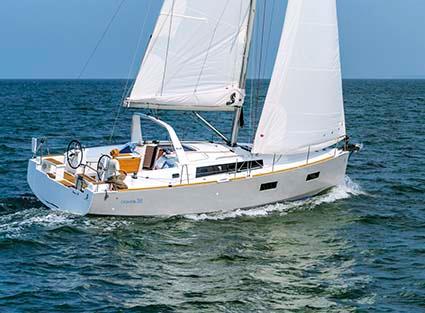 Review: French marque Beneteau has struck a chord with judges on both sides of the Atlantic with its new Oceanis 38 sailing yacht

French marque Beneteau has struck a chord with judges on both sides of the Atlantic with its new Oceanis 38 sailing yacht, a boat designed with an adaptable interior in three versions to suit different markets.

Like her bigger sister, the 2012 Euro Yacht of the Year winning Oceanis 45 yacht, the Beneteau 38 captured that accolade this year in the Family Cruiser category. Meanwhile in the USA, the new yacht was also a hit taking out Sail magazine’s 2014 Best Boats (Monohull 31-40ft) and the NMMA Innovation Awards (Sailboats) at the Miami boat show in February.

Beneteau said its ability to evolve a yacht to meet different markets and sailors’ needs as a daysailer, weekender or cruiser led to the award-winning concept behind the Oceanis 38.

To achieve this the yard and Nauta Design focused on removing constraints so that, by the addition and subtraction of certain design elements, the function of the boat can be changed to suit the individual owners’ requirements and evolve with the owners as their circumstances change.

There are three variants of the Oceanis 38.

Find out more about Beneteau here.

This has accommodation in a single space with all partitions removed. There are no bulkheads to break up the interior and just one berth and head compartment. “The aft section provides a large stowage area but in the main saloon the galley is deliberately minimalist and four large panoramic hull ports make the interior extremely light and airy,” says Beneteau.

Available in a choice of two or three customisable cabins. Open cabins initially, these can be closed in later with Evolution Packs purchased as an option from the aftersales department allowing owners to create a configuration that meets their needs. Beneteau said it created a sense of space in the Weekender’s fore cabin without inbuilt storage and to compensate joined forces with luggage maker Longchamp to produce the Rolling Locker (this houses all accessories needed to make storage easier onboard. Packed onshore, it can be rolled along the dock and positioned in the dedicated space within the cabin). For traditionalists, a fitted locker is an option.

This model features a more conventional layout with two or three partitioned cabins a linear galley, dining area for six and separate shower compartment. The forward cabin partition is removable.

The Beneteau Oceanis 38’s hull is by Finot Conq and has a continuous chine for enhanced performance and additional buoyancy, plus a T-shaped keel said to provide optimum stability without prohibitive draft.

The beamy cockpit is spacious and enhanced by a mainsheet arch, which can be removed on the Daysailer. Twin wheels link to twin rudders, the cockpit also featuring a dropdown transom-swimplatform.

Find out more about Beneteau here.