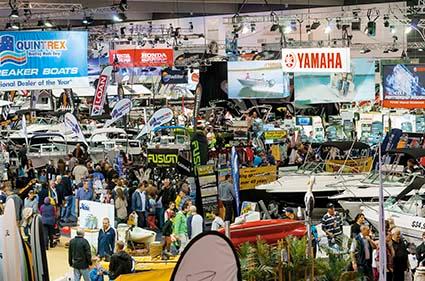 [Update 02/07/2014] The Melbourne Boat Show has successfully been and gone for another year. See if you can spot yourself in our highlights video above (or see what you missed out on).

The Boating Industry Association of Victoria (BIA VIC) has pulled out all the stops to inject new life and vitality into Melbourne’s premier boating event which returns to its original five-day format. Hosting a treasure trove of boats and boating accessories, this year’s show promises to be a spectacle of epic proportions with many new and innovative products making their Victorian debut. Here are just a few of the highlights that await lucky showgoers.

Retail giant JV Marine will be stocked to the gills with a host of new models from Quintrex, Four Winns and Signature Boats. Hardtops seem to be all the rage this season and are well represented within the range. Of particular note are the new Quintrex 650 Trident Hardtop and Signature’s 602F, 632F and 650F solid-roofed variants. The Boat Show will also be the official Victorian release of Signature’s innovative 543SF sportsfisher.

Bar Crusher’s Peter Clelland let the cat out the duffel bag and revealed his team have fired up their blow torches in anger to craft a pair of alloy pilot house models to complement the existing range. Featuring fully enclosed hardtops with rear walls and a lockable door to the wheelhouse, the pilot house variants will be available on both the 780 and 670 hulls and will no doubt attract their share of the spotlight.

Haines Hunter extends its Offshore range with the compact yet capable 625, that builds on the reputation established by its larger sibling, the 675 Offshore.

Cruise Craft makes a splash with the fully enclosed hardtop version of the 625 Explorer. Standing alongside the larger 685 Explorer HT and smaller 595 Explorer/Outsider twins, the new 625 Hardtop will be prominent on the New World Marine stand.

Whittley Marine hops onboard with an extensive range, including the new 26 Essence concept that promises big-boat luxury in a compact and affordable family cruiser. Described as a “wave-piercing caravan”, Whittley’s pocket cruisers offer an easy-to-tow alternative to moored cruisers or a floating mobile home with 360-degree waterfront views. Also featured are the award-winning SL range of family friendly sportsfishers and the value-packed CW series.

Not one to miss out on an opportunity, Evolution Boats will be there to release their long-awaited enclosed hardtop version of its 650 Apex Predator.

Adrenaline hounds have not been left out in the cold as all the major players showcase their latest contributions to the high octane market. New PWCs from Seadoo, Yamaha, Kawasaki and others will cater to the performance fiends, while Master Craft and Malibu will have towsport enthusiasts salivating over their tournament-grade offerings.

Engine manufacturers are also out in force. Yamaha brings out its spanking new F175 four-stroke and the long-awaited lightweight F115A, while Evinrude’s latest additions to its E-TEC family of direct injection two-strokes will also break cover. Honda stakes its claim with the punchy new 80 and 100hp models and Suzuki will up the ante with its latest power plants. For those who prefer their engines inside their boats, Volvo Penta and MerCruiser will be on hand as part of the inboard fraternity.

Not to be outdone, electronics and accessory distributors will be out to claim their share of the public interest by bringing the latest in marine technology to Melbourne.

Lowrance features its value-packed Elite CHIRP series, available with 5in and 7in screen sizes, either as standalone fishfinders or in sounder/GPS combo format.

Raymarine has extended the easy-to-use Dragonfly CHIRP range to include the stunning widescreen Dragonfly 7 and will also highlight the redesigned Lighthouse II user interface which offers more than 20 new user-friendly features.

And if all that’s not enough to float your boat, Trade-A-Boat, The Complete Book of Boats will host the Trade-a-Boat Superstage featuring the fish-filled Yamaha Supertank. There’ll be hints and tips from some of Victoria’s most talented anglers and prizes galore – so get involved.

Topping the bill this year is the globetrotting host of Channel 10’s Logie-nominated IFish, Paul Worsteling, who will entertain the crowd with his adventures and also answer any fishy questions you might be harbouring.

For the younger crowd, or the young at heart, Flathead Fred’s Fun Fishing Show will enthral and amaze as Freddy Bayes (Flathead Fred) imparts his wisdom on our shovel-headed friends. You’ll be bopping along to his timeless, ‘Fishin’s fun for everyone’ in no time.

An excited Steven Potts, recently appointed CEO of the BIA, was keen to point out that the Boat Show team has gone to great pains to make this year’s show a standout.

“It’s a great way to spend time with the whole family and there will be plenty on offer to suit everyone”, he said. You’ll have no argument from me.

The BIA Melbourne Boat Show launches Thursday, June 12 and runs until Monday, June 16. The show will be open for business from 10am to 8pm each day and tickets can be purchased online or at the venue.