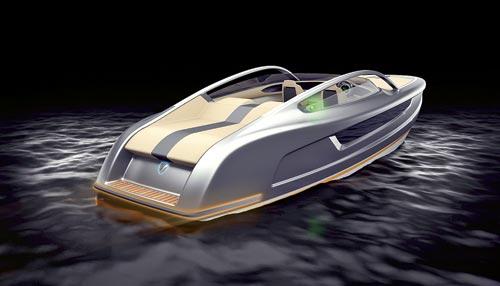 It’s been a good start of the year for popular British luxury motoryacht builder Fairline, announcing the 100th build of its flagship Squadron 78, the world launch of the Targa 48 Gran Turismo and the unveiling of its futuristic Fairline Esprit sportsboat concept.

The Esprit and the Targa 48GT were revealed to the public at the 2014 Tullett Prebon London Boat Show.

The Targa 48GT was one of 11 Fairlines at the London extravaganza and sits alongside the Targa 48 Open and Squadron 48, both making their world debuts in late 2013 and are said to be enjoying “exceptionally strong” order books.

This latest model features a newly-styled interior with a wide selection of fabrics and materials available, a luxuriously spacious and sociable upper deck, and saloon with opening windows and plentiful seating. The helm has twin seats and adjacent navigator seating, while the cockpit incorporates a J-shaped lounge with table and the option of a sunbed conversion. The 48GT is available in two or three cabins with an optional lower saloon/dinette in lieu of the third cabin.

Meanwhile, tomorrow’s boating according to the Brit marque is in the guise of its Fairline Esprit concept that’s said to offer sustainable motor boating without compromising styling and performance.

The Esprit incorporates sustainable materials in construction and design with bio-derived epoxy resins and needle punched flax fibres used in the build, while the interior has ecoyarn upholstery treated with a waterproofing plasma process. Recycled synthetic teak is used for decking and a solar-panelled T-top folds away to cover bow seating when not in use.

Immediately eye-catching is the Esprit’s Multifunctional Steering Position with paddle throttles and integral LED control display allowing chartplotter, radar and system info to be displayed inside the steering wheel.

Power options consist of a 400hp diesel engine coupled to an electric motor. Producing 30kts under diesel power, the Esprit in either silent-running or sustained low-speed cruising is capable of 5kts in electric mode.

“We used the design process to explore what a sustainable future could look like for Fairline,” said design manager Andy Pope.

“The vessel size, the materials used, the build processes; everything was put to the sustainability test. We’ve been amazed at the positive response to what started as an adventure in concept design. The Fairline Esprit really seems to have caught the imagination and futuristic design touches like the control display on the steering wheel have been very well received,” he said.

For more information, go to fairline.com/en