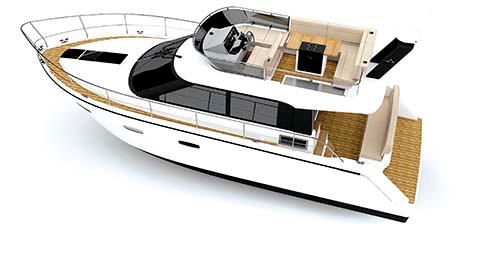 The Griefswald-based builder took over Sealine only in December and is now the second traditional English brand under the Hanse Group umbrella, following its 2007 buyout of Moody.

Sealine is also the sixth brand in the Hanse portfolio, which also includes Dehler, Fjord and Varianta.

Hanse said its motorboat line was previously covered by only the sporty Fjord boats and the purchase of Sealine now gives the company a step into the motorboat mass-market.

For more than 40 years, Sealine has been a leading UK manufacturer of luxury motoryachts, says Hanse. The company recently achieved a turnover of around Euro 40 million but a weak capital base meant Sealine was forced to file for administration in the first half of 2013.

“The motorboat market is not only larger than the sailing boat market but has also been experiencing growth for some years now contrary to the trend in the sailing sector,” said Hanse Yachts CEO, Dr Jens Gerhardt. “I am sure that the sales of both our Fjord motorboats and our sailing boats will benefit from adding the Sealines to our range.”

Hanse said moving Sealine production to Griefswald is a key element of the restructuring currently underway at the company and there will be major synergies with existing brands. The resulting fixed costs, it said, can be spread over more products, as the existing production capacities will be utilised more effectively.

After the start-up costs Hanse believes the critical production mass will be reached faster in future and increase its competitive edge.

The Sealine F380 model launch at Dusseldorf was accompanied by plans to expand the product range even further in 2014, with details to be announced later.

“Sealine will benefit from our development expertise in the future and our customers can look forward to a wide range of new models,” said Dr Gerhardt.