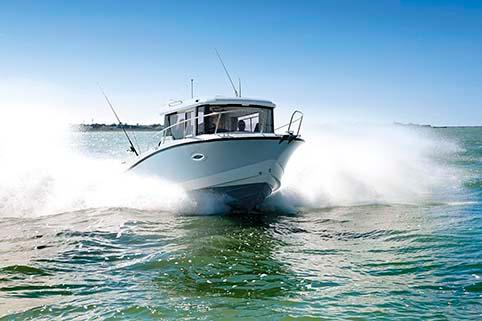 Since its Australian release in 1999, the “original” Arvors have amassed a strong following amongst anglers and cruisers lured by the innovative packaging and frugal shaft-driven Nanni diesel powerplants. The semi-planing hulls, while not the quickest rigs on the water, have an undeniable charm and a reputation for seaworthiness and reliability. The recently released Sportsfish series builds upon this solid foundation with an initial release of the 755, 675 and 605 outboard-powered models to fill out the fleet.

An Arvor Sportsfish is defined by its uniquely European architecture, albeit it with a healthy dose of inspiration from parent company Brunswick (Mercury). In profile, the boat echoes the lines of a commercial trawler with an upright fully-enclosed walkaround wheelhouse serving as accommodation for skipper and crew.

Full height sliding glass doors provide access and ventilation, but shut out the elements when required.

Full bows with a generous flare set the scene and suggest a dry ride. A wide hipped stance with generous midship beam cascades to a gently curved transom.

An efficient hull design, we’re reliably informed that unlike many boats in its class, it actually performs more than adequately with minimal power.

All in all, the new Arvor Sportsfish range seems an interesting addition to a brand that’s forged a reputation for being functionally different and we’re keen to get our hands on the big 755 over the next couple of weeks.

The largest model in the new Arvor Sportsfish lineup, the 755 Sportsfish is appointed for fishing with the addition of a livewell, plumbed killtank and rod holders and is keenly priced from around $105,000.

Electronics and other fishy accessories such as baitboards can be added as required.

Originally published in Trade-A-Boat #450, March / April 2014. Why not subscribe today?