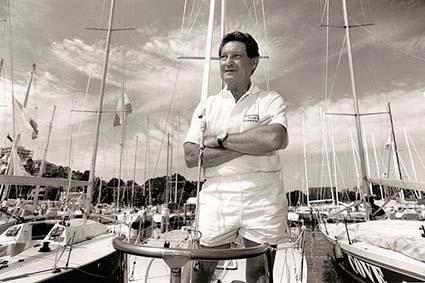 The past commodore and life member of Melbourne’s Sandringham Yacht Club (SYC), Abrahams was highly regarded as a mentor, friend and role-model for many members, as well as a crack skipper.

According to SYC commodore Chris Carlile, Abrahams joined the Port Phillip Bay club in 1964 and raced a succession of fast yachts in a career spanning some 50 years. He found success in many of the world’s premier yacht races, from the Sydney Hobart to the Clipper/Kenwood Cup in Hawaii, the Admiral’s Cup in England and numerous other international events.

“As early as 1970, Abrahams was making a name for himself in sailing; originally with the first racing yacht he owned, Odin, then with Vittoria, the first Victorian challenger in the Admiral’s Cup,” said Carlile.

In 2002, the unassuming and quietly spoken Abrahams received a Commonwealth medal for Services to Sailing for 50 years of successful involvement in the sport, and in 2006 the Services to Yachting award.

The Sydney Hobart was Abrahams’ race, beginning his association with Australia’s internationally famed blue-water classic in 1963. In all, he competed in 44 races, 43 of those consecutively, a record that still stands. His last Sydney Hobart was as an 80-year-old in 2007 on Challenge.

Abrahams campaigned the S&S 45 Challenge II for his first Sydney Hobart handicap win in 1983 and then raced the carbon fibre Frers 43 Challenge III, competing in the 1984 and ’87 Admiral’s Cups.

It was on Ed Dubois IOR one-tonner Ultimate Challenge he realised his second Sydney Hobart handicap success in 1989 and a close second in 1991, as well as other top results with many an overseas trip included up until 1995. He also won the Sydney 38 National Championship four times and all but one Victorian Championship since its inception.

Carlile said there was much more to Lou Abrahams than a successful sailing career: “As Commodore from 1972 through to 1973, he introduced a level of professionalism and business acumen that was instrumental in the continuing development of the Club.”