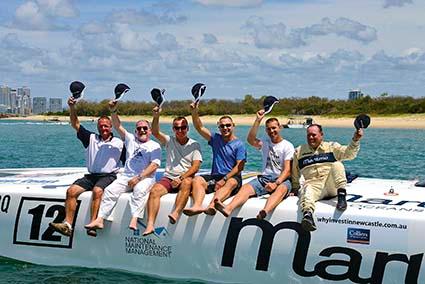 The high-octane ride was part of a special weekend thrill package provided by Maritimo as a charity auction prize and a Sydney International Boat Show prize last year.

Two of the groups successfully bid $18,000 each at the Starlight Children’s Foundation’s annual charity fund-raising event last year to snare their spots and the third participants won their package at the Sydney boat show.

The Once In A Lifetime Experience for four included two days aboard a catered and skippered Maritimo motoryacht, return airfares to the Gold Coast, accommodation at the Intercontinental Sanctuary Cove Resort, a tour of the Maritimo plant, marlin fishing and a spine-tingling run in the Maritimo offshore raceboat with skipper Peter “Muddy” McGrath.

Taking it in turns, Michael Dover, Matthew Charker, Brent Ferguson and Rick Manietta were kitted in race gear and wedged into the sleek craft. A strong southeasterly and fair-sized swell made for a thrilling run – two laps from the Gold Coast Seaway to opposite Broadbeach and return.