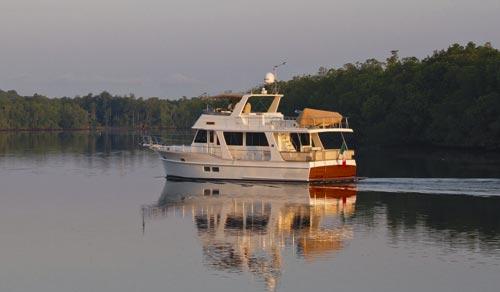 The new Grand Banks 54 Heritage EU has already made its mark as one of the luxury builder’s most successful models. Unveiled at the end of last year, we’re told 12 of the new model have been delivered or are under construction at the company’s yard in Malaysia.

Boat No.8 is scheduled for delivery to Australia in November, Hank Compton and the team at Grand Banks Australia responsible for the sale of four of the new boats into the Asia Pacific region.

“These boats were all sold sight unseen,” said Compton. “We showed people the detailed drawings and specifications for the boat and they trusted us to deliver.”

The first 54EU to arrive in Australia is being delivered to Perth boating enthusiast Julian Walter.

“We have owned Halvorsens over the years and we have always admired the styling and build quality of the Grand Banks brand,” said Walter.

“The new 54EU is built on the 53 Aleutian hull, which has given it more beam than you would expect of the Heritage series. This translates to magnificent space through the cabins, particularly the midships master suite which runs across the full beam of the boat.

“We do most of our cruising at sensible speeds. There is no need to rush. Our Heritage is built to cruise all day at 8 to 10kts. But it has a turn of speed if I need to get back to port quickly or get out of the way of a storm. The boat is capable of planing speeds up to about 21kts,” he said.

The Walter family has used its boats mainly for cruising to Cockburn Sound and Mandurah, as well as extended trips to Rottnest Island, and plans to voyage north to the Abrolhos Islands and farther along the coast in the new Grand Banks.

Walter visited the Grand Banks yard four times during the build of his 54EU. “When we suggested that the davit on the flybridge deck should be stronger they promptly upgraded it – at no cost,” he said. “The list of standard features was also impressive. A number of items I assumed would be paid-for options turned out to be standard, down to monogrammed bath towels.”

Walter optioned his boat with the Twin Disc Electronic Joystick System (EJS) for tight manoeuvring and is said to be the first Grand Banks delivered to Australia with EJS.

“My wife Cheryl and I often sail two-handed and berthing can be stressful in those conditions,” he explained. “We expect the EJS will solve those issues.”

The Grand Banks 54EU is the largest of the company’s Heritage fleet of classic trawler-style cruisers.

The standard three-level layout includes three cabins and two bathrooms in the accommodation below decks, a midships galley and aft saloon on the main deck along with the lower helm station, and a large entertaining area and helm on the flybridge.