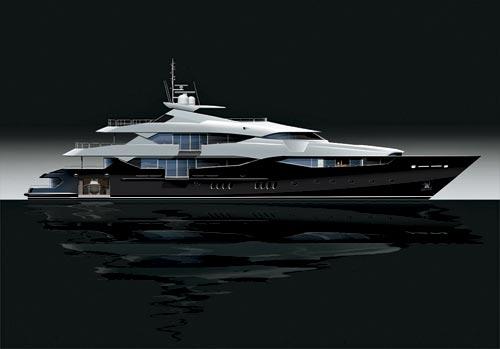 Formula One heavyweight Eddie Jordan is upgrading his 120-foot Snapper to Sunseeker’s new flagship, the tri-deck 155 Yacht which is now in build and due to launch in 2014.

With a 4500nm range, the 155-foot superyacht is the first ever semi-displacement, round bilge and long keel hull from the Sunseeker yard, as well as the biggest built by the UK marque.

Sunseeker says the 155 Yacht takes the concept of series building with personal customisation a step further than others, the modular composite build methodology virtually allowing owners a free hand, not just in the interior but also in the design of the superstructure. We understand that under Jordan’s instructions, the 155 Yacht will include a nightclub, an ice blue hull, as well as transverse garages for tenders and watertoys, and a folding transom/swimplatform that’s described as a “beach club” stern, just perfect for watching the Monaco Grand Prix.