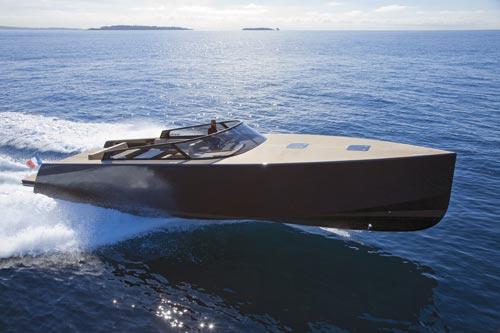 It seems big is better these days when it comes to flashy dayboats, and they don’t come much bigger than the imposing and trendsetting VanDutch 55 that swanned into Sydney late last month.

Officially launched in June, the 54-footer is the new flagship from Holland boatbuilder Vanguard Dutch Marine and the third in the builder’s portfolio – joining the 30 and 40. All drawn by noted superyacht naval architects Frank Mulder Design.

The VanDutch 55 borrows the minimalist lines of her smaller sibling, the 40, with an arrow-like and slab-sided form racing back from an almost plumb bow. About halfway along the boat’s length the massive flat-iron foredeck gives way to a low-profile windscreen that sweeps back and rakes down the hull sides. The sheerline is a gradual taper from the bow to an open transom and prominent swimplatform.

From above, beige lounges and seating complement the teak-topped gunwales, deck and bow of the VanDutch 55. Such styling affirms the builder’s opinion that the dayboat is the “epitome of avant-garde yacht design and craftsmanship”. Also noticeable are the acres of main-deck entertainment areas.

Flat black panels of the helm bulkhead include a slide-across companionway cover. Seating extends from dual two-person helm seats that form part of a huge four-sided aft dinette ahead of an equally vast sunbed, all protected from the elements by a new electric bimini.

Complementing the sleek lines of the VanDutch 55 are twin 900hp Volvo Pentas and designer finishes above and below.

And it’s downstairs where this dayboat leaves many of its like behind, with actual accommodation for a couple and friends or a small family to overnight and weekend away. There’s an angled saloon with portside lounge and table facing a kitchenette, and a master cabin in the bow with island double. Amidships is a twin-single cabin to port and a bathroom opposite, both separated by the companionway with entry from the saloon.

Importer Dick van Damme says the 55 has answered the challenge to take another step forward in luxury boating design and speed.

“The 55 is a real show stopper,” enthused van Damme.

“I’ve been asked a number of times what makes this boat so special? The hull design allows the boat to cut through any water, enabling a fast smooth ride on a luxury vessel, all the while showcasing contemporary design at its best.

“The outdoor deck can accommodate up to 20 people comfortably and the cabin is fully equipped with state-of-the-art technology and can sleep up to three couples or four to six people.

“The 55 is a larger, heavier boat but is still able to maintain a speed of up to 40kts,” he said.

The VanDutch 55 is optioned with an extensive colour range for the hull, decking and exterior, and retails at $1,490,000 (ex GST).