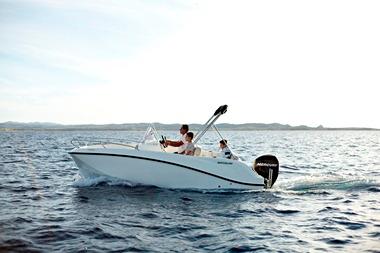 Quicksilver has released a luxurious new centre-console, the Activ 505 Open, a trailerable boat described by the manufacturer as “blending contemporary European styling with ageless Aussie practicality”.

According to Quicksilver, a key feature on this new model is its extensive amount of storage, traditionally an area that is lacking in centre-console layouts.

Quicksilver says the helm station interior has extensive storage along with double seats for driving while seated or standing. The helm seat also has a flip-over back-rest so the skipper can face passengers on an aft lounge.

Quicksilver says the 505 Open is also suitable for fishing or recreational watersports. It comes with rodholders and an optional ski pole, along with a large swim and boarding platforms.

Quicksilver boats are available in a range of styles. The Activ 505 Open is the smallest in the series that measures up to 6.75m. A “SMART” Edition of the 505 is available which includes options like cockpit upholstery, a demountable table, sunlounge extension and bimini cover.