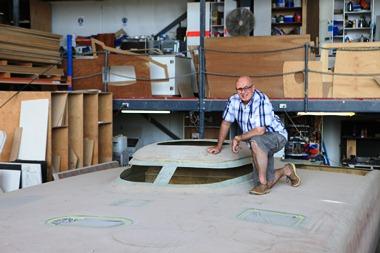 According to Maritimo Offshore Racing spokesperson Kurt Davies, the new offshore racing boat was “like a Formula One race car on the water” and featured many refinements and design changes.

“Obviously we don’t want to divulge too much and alert the competition, but this boat is shorter than our world championship-winning boat and we are confident it will be capable of speeds of almost 150 miles per hour,” he said.

“We have also created a trim system that uses accumulators which store energy in canisters and can deliver pressures of around 3500psi, enabling us to go from minimum to maximum trim and back in one second.

“This should mean we can take the corners around the drums on any circuit at full speed and cut valuable seconds off our times.

“We have also come up with some other refinements that are extremely exciting, but we won’t be giving too much away at this stage.”

Davies said planning on the new offshore race boat began 18 months ago. Powered by two Mercury 525hp engines, its racing debut would be at the Hervey Bay Supercat Series this November. For international competitions in 2014 or 2015 the boat would compete with an 850hp UIM engine.