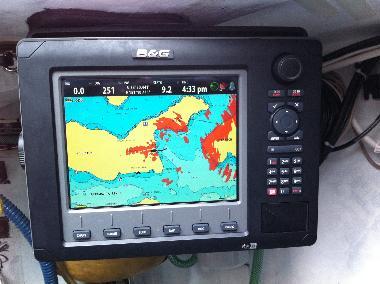 Your Say: Have Electronics Made it too Easy?

From my station manning the for’ard spring, I can see the sweat running off his tanned and wrinkled brow. A picture of concentration, his piercing eyes sweep the scene for clues to the riddle consuming his mind. A swirling floodtide under the piles, flags fluttering in the breeze, silt billowing from the bottom; all critical inputs of data for a complex algorithm which must be solved correctly if we are to stand any chance of parking the heavy, single-screw trawler incident free, and pride intact against the jetty.

A puff of smoke from his pipe mirrors the billowing black roaring from the dry stack as the Detroit Diesel bends the protesting prop backwards against its will. In a final deft touch, honed from years on this tiller, the old man swings the wooden wheel stiff against the current. It’s a perfectly timed act of grace counteracting the transverse thrust as we hover a barnacle’s whisker from the ship-beaten timbers. In a flurry of silent teamwork the lines slip on and we are parked.

This is how it once was. No joystick controllers, no hydraulic thrusters, no Skyhook. A captain was revered, a man of skill whose parking ability was worn as a badge of pride alongside the size of his catch.

My own first drive took months to master. A single 130hp Ford pushed 50 feet of creaking timber. The wooden wheel with its skin-worn spokes turned a clanking chain to a six-foot rudder. No GPS, no autopilot, just an adjusted compass and a paper sounder. When in sight of the coast, diarised landmarks were the guide, once over the horizon only the compass, the sounder and a fair amount of dead reckoning were of use. It was a great way to go boating and in the fishing world true legends were born because without a GPS to guide you to the nearest rock only those with experience and a photographic memory could find fish.

The same cannot be said today. For the average boater technology has largely replaced skill. The first time I reviewed a pod-drive boat, I put a virgin boater on the helm and she parked a $1,800,000 vessel against the flow of the tide on her first attempt. It was a huge confidence builder and proved to me such fancy kit had the potential to open markets to boating like never before.

Of course you cannot and should not stand in the face of progress. It is just that I worry the old skills will die with the generation that perfected them. It is years since I took a compass bearing or plotted a manually rendered waypoint on a chart, and even sextant-trained blue-water sailors seldom practice the ancient art anymore; such is the reliability of GPS.

The real concern in my eyes isn’t about boating it’s about the cumulative impact this hardware of convenience will have on my children. The importance of self-sufficiency is underestimated these days. Life is easy in the developed world and it should be, it is what our parents strived for. Yet I know from working with many young people that it is the self-reliant ones who rise to the top.

Ironically, one of the best ways to learn independence is to go boating – along as it’s back-to-basics boating. My five-year-old daughter loves the boat, so I guess I should dig out those dusty old charts.

YOUR SAY: Are boaters loosing their touch? Has technology made boating less or more enjoyable?