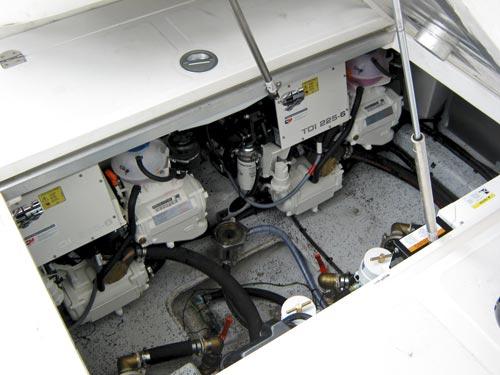 Queensland boat owner David Chadwick now gets twice the range and half the fuel bills after repowering his 3700 Sunrunner with TDi technology, Mercury Diesel says.

“It’s a fantastic outcome,” said David. “I don’t know why more people don’t do it. You can’t go wrong!”

A late-comer to boating, 51-year-old David bought his first boat six years ago. That 2800 Mustang lasted just 12 months before he moved to the Sunrunner.

Based on the Gold Coast, David regularly took the family out for local cruises to nearby Morton Bay. “But it wasn’t until 2010, when I went to Gladstone for work, that I realised I couldn’t really go anywhere in the boat,” he admitted.

With a 600lt fuel tank his twin 5lt petrol engines only had a range of 150nm.

“I started carrying an extra 100lt in jerry cans to get out to the reef and back but that’s just too dangerous,” David explained. That’s when he decided to upgrade to twin 225hp Mercury Diesel 225.6 TDi 3lt V6 engines, based on the Audi Q7 diesel made by Volkswagen.

“The new engines have easily halved my fuel costs,” said David. “The trip between the Gold Coast and Gladstone used to cost me $2400 in fuel. But with the TDis, a good run only costs $900. Once I did it in terrible conditions in 4 to 5m swells and that only cost $1200.”

David adds he used to stop three times to refuel; now it’s only once with his range extended from a mere 150 to 320nm.

And that’s not the only improvement, says Mercury, claiming the new engines are slightly lighter so the Sunrunner sits higher in the water and overall performance has improved despite dropping 70hp in total.

“It’s certainly a better boat. It gets onto the plane faster,” David continued. “With the old engines I had to stay at 16 or 18kts or she’d drop off. Now I can sit on 14kts, where these engines are really economical, and she stays up. The power doesn’t just die off like it did.”

The new engines are fitted to new Bravo 3 sterndrives to maximise performance.

“To be honest, I wasn’t sure about the need for the Bravo 3s, but the guys from Mercury persuaded me and now I’m glad they talked me into it,” says David. “The improvement and fuel efficiency are just fantastic.”