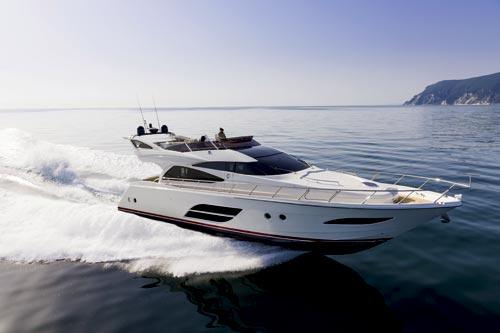 Dominator, a North Italian luxury boatbuilding yard, has splashed down in Australia with plans for an East-West dealer network locally, as well as in New Zealand.

The Austrian-German owned Dominator manufactures its range of fully-customised boats in Sano, on Italy’s Adriatic coast and also inland at Trento some 100km north of Verona. The company outsources most work on its boat components, including hulls, to local contractors, before assembling them back onsite.

Dominator was founded in 1999 and launched its first boat, the Dominator 65, in July 2001. The yard now has a portfolio of seven bespoke sports and motor yachts, beginning with the 65-foot Dominator 620, which boasts a top speed of 34kts and three flybridge layouts.

The flagship is the Dominator 40M, a sleek superyacht flaunting almost 7000hp in engine grunt and a 2000nm range. Unlike the rest of the fibreglass range, the 40M has an aluminium hull built by the Rossi Navi shipyard, and incorporates an owner’s master, two guest cabins, plus three crew cabins.

Perth-headquartered distributor Dominator Yachts Australia & NZ confirmed to Trade-a-Boat that local boaters will not have long have to wait to see the brand here, with a Dominator 640 soon its way to a Victorian owner.

The 65-footer is the latest in the fleet and had its world premiere in Venice last June. Penned by Alberto Mancini, who we’re told comes from a sports car design background, the 640 is a sweeping flybridge model, aping the aggressive but sleek lines of her sisters and said to clearly show the personal inspiration of the designer.

The hull is built with vacuum-infusion technology with carbon fibre incorporated into selected structural components. Among other features is a hydraulic bimini top, which can be optioned as a carbon hardtop on request.

The Dominator 640 hull no.1 is the boat that’s Australia bound and due here by the end of the year. Dominator Yachts Australia’s Kyle Timms told us her owner plans to base the boat at Airlie Beach on Queensland’s Whitsunday Coast.

Additionally, the sportsyacht has joystick manoeuvring and upgraded twin 1200hp MAN engines. Among the electronics is an AIS system plus 3G Wi-Fi connection in every cabin, while all multifunctional displays and touchscreens are large, offering an easy-to-use interface.

Accommodation on the Dominator 640 comprises three cabins, all with bathrooms, and one crew cabin with bathroom. The saloon and amidships master stateroom are equipped with a home-theatre system. The saloon layout includes aft lounge area, a forward starboardside galley behind the helm and a dinette opposite. The flybridge has a two-seat helm and lounge with table aft, plus stair access to the cockpit dominated by a large transom lounge.

Timms adds Dominator is presently establishing a dealership in either Sydney or Queensland, as well as New Zealand, with details to be released.