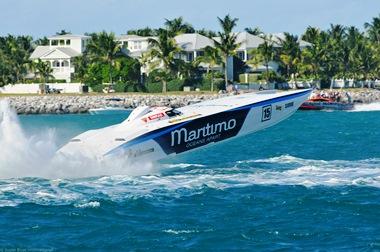 Australian luxury cruiser manufacturer Maritimo, along with founder Bill Barry-Cotter, has launched a program of fundraising initiatives that will support selected charities throughout Australia over the next twelve months.

Maritimo announced the start of the initiative with “A Once in a Lifetime Experience” live auction package. Up for offer were two days aboard a Maritimo luxury motoryacht, return airfares and accommodation at the Intercontinental Sanctuary Cove Resort, and the opportunity to co-pilot Maritimo’s World Champion Offshore Race Boat.

The package was put up for auction at the Starlight Children’s Foundation annual fundraising event, Star Ball, in Sydney.

“The atmosphere in the room was electric as images of the Maritimo race boat roared across the super large screens; the bidding was almost as fast with a winning bid again of $18,000,” said Maritimo sales and marketing manager, Greg Haines. The winning bid for the package surpassed the final bids on all other items offered on the night.

Haines said the thought of co-piloting a boat capable of speeds around 175mph had certainly captured the imagination of bidders, so much so that a second package was requested. Maritimo’s contribution raised no less than $36,000 in total, allowing for six “Wishes” to be granted.

Bill Barry-Cotter said he was delighted with the result and was very pleased that Maritimo could make such a meaningful contribution to Starlight.

The next charity lined up for Maritimo’s support is the Melanoma Institute of Australia.

Maritimo’s interior design consultant, David Stewart who, along with his wife, Melanie, have been helping the company identify other suitable charity events to support.

The Stewarts are deeply involved with charity work and were instrumental in running annual fund raising events in Sydney for Cure Cancer Australia between 2001 and 2005, raising more than $350,000 at each event.

Steward commented: “The bulk of the money raised must actually benefit the charity and reach the bottom line, not get absorbed into administration and costs.”

Haines said Maritimo was considering other appropriate charity events in Brisbane, Melbourne and Perth and would provide backing for four to five events in the next 12 months.