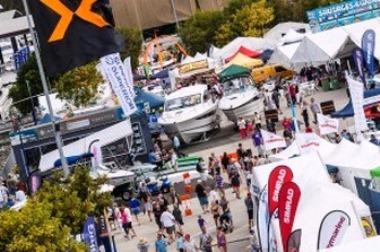 The organisers behind the Gold Coast International Marine Expo have announced an additional 20 per cent of exhibition space has been released for the event running on the Gold Coast Marine Precinct in Coomera, Qld, in November this year.

According to the organisers, the event has “become one of the major boating attractions on the Australian boat show calendar and is expected to double in size over the next five years”.

Gold Coast International Marine Expo spokeswoman Emma Milne said 99 per cent of the original extension space has already been sold to past and new exhibitors.

“With just two months until the Expo opens, we have had an influx of new exhibitors securing display sites and we expect to further expand the total site, which will mean we could have exhibits from Waterway Drive all the way to the Coomera River, which would be incredible for our third year,” Milne said.

“On the marina, the Expo has already sold 75 per cent of the berths and we are honoured to receive continued support from our founding exhibitors with a great many companies securing larger extension sites than previous years. We have a lot of new attractions and entertainment planned for 2013, such as the Expo high divers presented by JSW Powersports, so this year’s Gold Coast International Marine Expo is shaping up to be the biggest and the best yet,” she said.

“We are also pleased to host a Riviera display that will give Expo visitors an insight into how a Riviera boat is designed in 3D computer aided design systems as well as viewing the various stages of construction of a world-class luxury powerboat,” Milne said.

The organisers say they expect to see more than 500 boats on display, including over 100 boats in the on-water display.

The Expo is a partnership between Gold Coast City Marina and Shipyard, Riviera, Quintrex, International Paints, and Clipper Motor Yachts. Milne said attendance at last year’s Expo defied industry trends with a 24 per cent increase on the first year’s attendance.

The Gold Coast International Marine Expo runs from November 1-3 from 9am to 5pm with gold coin donation and free parking.