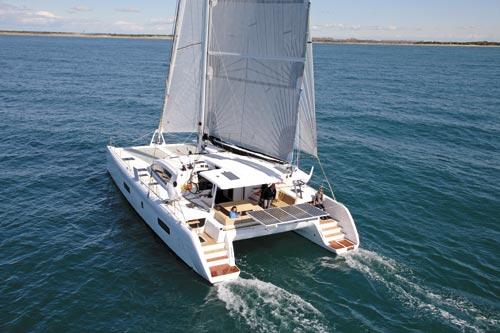 “It was such a rush to be steering a 60ft cat at 16kts on tiller and feel completely in control,” says Brent Vaughan after testing out some French-built Outremer Yachting catamarans on their home waters. “These boats are ideal for experienced sailors that appreciate performance.”

Vaughan is MD of Sydney-headquartered Multihull Central, the new distributor for Outremer in Australia. The three-model range includes the 59ft Outremer 5X, the 2013 European Boat of the Year (multihull category), and the new Outremer 45 and 51 variants.

His comments on the new-to-Australia brand came after he and sales rep Andrew Crawford recently competed in the Outremer Cup near the builder’s home port of La Grande Motte in the south of France.

In addition to regular wheel steering, Outremers are noted for their signature tiller helm positions with dedicated seating on each hull offering sailors the thrill of putting the boat into “the groove” and feel it respond directly through the rudder.

Vaughan said his French tour of the yard also gave a detailed insight into the performance, layout configurations and construction techniques that Outremer offer on all three models.

Impressed with Outremer Yachting’s strong commitment to performance and lightweight construction, Vaughan added: “It’s very easy for manufacturers that start with a high-performance design to get seduced into loading their boats up with creature comforts and giving into demand for volume just to appeal to a wider audience, which in turn slows the boat down and it becomes just a regular cruising cat.

“Outremer have not compromised and managed a brilliant balance between performance and modern luxury on all models by keeping weight down, yet still offering a clever and very comfortable cruising platform,” he said.

Outremers are constructed using resin-infused foam core with solid GRP to below the waterline. The local agent adds that quality control is closely monitored at the yard with checks at each production phase.

To optimise performance and reduce displacement, optional carbon bulkheads and reinforcements to reduce the hull weight are available, along with optional carbon rotating rigs.

“We are very pleased to be representing this prestigious brand in Australia, which fits perfectly alongside the Seawind range of catamarans that we also represent,” said Vaughan, “So we can now offer a range of performance and high-performance cruising catamarans from 35ft all the way to 59ft.”

Multihull Central adds it is offering an attractive demonstration package to the first Outremer sold in Australia, including optional marina berthing, management and coaching in Sydney Harbour.