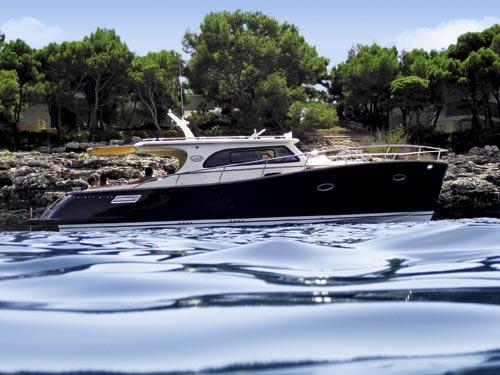 Some two years in the making, the new models are a 28, 34 and 39 (pictured above), and join the only other boat in the Hudson Bay line-up, the more standard sedan-shaped HB50 flagship. And unlike the rest of the Chinese-built Clipper range these newbies are made in Europe.

Clipper’s MD, Brett Thurley collaborated on the design with Mark Campion, to create the new sedans with flared hull and tumblehome transom in the Maine lobster boat heritage.

"These superbly-styled vessels are crafted for the buyer who wants something with a little more class and individuality over the production sportscruiser,” said Thurley. “We have chosen to have them built in a custom shipyard in Europe to ensure a finish of the highest hand-built quality, befitting this style of vessel.”

With fuel economy and reliability a priority of the design brief, all three models have single-diesel shaftdrive power and planing hulls, with Clipper quoting running speeds of between 20 and 24kts.

The 34 and 39 have the galley on the same level as the cockpit as well as a sunroof, extendable awning and outdoor entertainment area with barbecue, fridge and L-shaped seating with table. Hull colours, such as navy blue, silver and cream are also available on all three boats.

A notable addition is an overhead rain-shower head with hot and cold mixer under the roof overhang, which Clipper says offers “a true outdoor shower experience” after a swim or a freshen-up before dinner.

Two cabins have also been incorporated on the HB39 suiting a family with children.

“Based on customer feedback from boat shows and events, the focus was to create a family-friendly layout to appeal to mums and dads wanting to spend cruising weekends aboard rather than just dayboating,” said Thurley.

Powered by new-generation Yanmar electronic diesels, the 34 and 39 are fitted with genset, air-con, Raymarine electronics, ultra-leather sofas and Corian bench tops as standard.

Thurley told Trade-a-Boat that the three new-builds are under construction in Turkey and will be on-water sometime in October before their world premiere at the Gold Coast Marine Expo (November 1 to 3).

For more information, go to www.clippermotoryachts.com.au