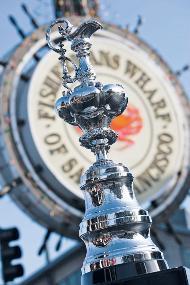 Has the America's Cup Lost Its Mojo?

The first time boating truly captured my imagination and made me think it might be a career path I would want to follow was during the Fremantle America’s Cup. The year was 1987 and dirty Dennis Conner on Stars and Stripes had outwitted the Kiwis on their Plastic Fantastic KZ7, and was lining up Australia’s Kookaburra III.

A lack of television coverage in my hometown meant we were forced to catch the action on the wireless. And what coverage it was! By some quirk of timing – no doubt tied to the famous Fremantle Doctor – much of the listening was done on the school bus. Things have to be pretty exciting to shut up 30-odd teenagers, but master commentator Gary Jobson painted a picture of gladiatorial contest that would eventually have him inducted into the America’s Cup Hall of Fame.

So, if a scratchy radio commentary of two boats barely capable of exceeding 10kts broadcast on a school bus travelling down a dusty gravel road can silence 30 teenagers, how is it that during the current America’s Cup, which is being raced on reputedly one of the fastest sailing boats ever built, an AC72 capable of almost 50kts, is struggling to gather a following?

I believe the answer lies in the romance, and frankly, so far 2013 event has had none. If the organisers believe they can build media success on speed alone I suspect they are wrong. Where is the underdog? Who is the battler?

Today’s audience is no different emotionally from the one in 1987, and without someone to barrack for all the fireworks in the world aren’t going to sell it. I mean for crying out loud, the first two races of the challengers’ series only had one contender, and the rest of the Louis Vuitton series was a procession-like whitewash, with every race (bar one when a flat battery meant the Kiwis had to withdraw) being a foregone conclusion within 20 seconds of the start! It’s a complex situation to be fair but certainly not the best way to kick-off what was once the greatest sailing event on the planet.

Contrary to many commentators, I say there will be another America’s Cup. However, let’s hope the next one attracts more teams. Out of the rabble a hero is sure to rise.

YOUR SAY: Have you been following the America's Cup? Do you find it as captivating as in previous years? If not, what do you think needs changing?