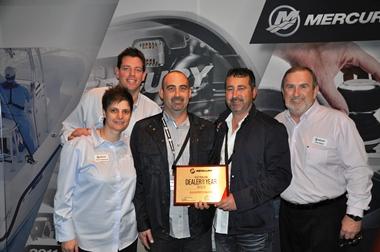 Mercury has announced that Western Australia’s Aquasports Marine has been named Mercury Marine’s Australian Dealer of the Year for the second consecutive time.

“Their motto – Pride is the Difference – is reflected in everything they do.

“After winning this award last year they certainly didn’t rest on their laurels. They stepped it up again and I happily congratulate the whole team at Aquasports Marine for doing a simply outstanding job.”

Mercury’s Dealer of the Year awards are not just about sales, but are decided by considering the dealership’s entire business.

“Aquasports Marine is a very active dealership and the team is a very professional unit,” said

“The guys have a fantastic understanding of the WA boating market. They really know their customers and provide exceptional customer care and a high level of service workmanship.

“They are at all the big boat shows, putting demonstration boats in the water, and the team promote all of our Mercury Marine promotions and products, including the new Mercury Insurance which they are selling with a passion,” he said.

“There’s plenty of competition in the WA market and these guys are clear market leaders.”

Australia’s best MerCruiser dealers have also been recognised with WA’s Hitech Marine being named MerCruiser Dealer of the Year for a fifth straight time.

“When it comes to MerCruiser product knowledge, the guys at Hitech can’t be beaten,” John Temple said.

“They always select the best engine for the job, their servicing and repairing work is absolutely second to none, they are just great,” he said.

The Mercury President’s Award for Service went to another W.A. operator, The Boat Business, which Mercury said lived up to its strong reputation as a dedicated and professionally focused marine service centre.

Leading original equipment manufacturers (OEMs) were also recognised for their excellence - Berowra Waters Wholesale in NSW as the master distributor in Australia of the Bayliner brand and South Australia’s Sterling Marine for Towsports OEM of the year.

“I say all the time that our dealer network is second to none and I truly believe that,” Temple said.

“Every year we see dealers and OEMs raise the standards even higher by doing more and doing it better, so I think every business which earned an award this year truly deserves the recognition and out whole hearted congratulations. Well done.”