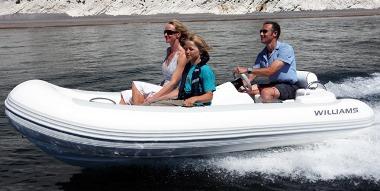 Sirocco Marine says the new range of Williams Performance Tenders follows on the success of the company’s Turbojet range, which it says has been a hit across the world.

Sirocco Marine’ managing director, Neil Webster, said for a strong European brand to remodel its entire range and release it in Australia is a significant affair — especially, he added, since the international directors of Williams will be attending.

“Williams manufactures over 90 per cent of the world’s jet tenders. They are a standard fitment across most major luxury boat brands including Princess, Sunseeker, Fairline, Ferretti and Pershing,” Webster said.

“We are all looking forward to the world release of the new 2014 Turbojet Tender models, which all boast a multitude of leading-edge design features; offering the customer greater reliability and safety, better fuel consumption and cheaper servicing costs.”

Sirocco said the 2014 range has many new and exciting features, designed to improve comfort, economy and customer choice. They include new deck and helm mouldings, incorporating adjustable back supports and a subtly redesigned inflatable tube with stronger styling accents, frames SeaDek non-slip foot wells. In addition, boarding the tender from the water is also said to be easier thanks to the option of a concealed telescopic bathing ladder that has a deeper reach into the water.

Other improvements listed by Sirocco Marine include upgraded upholstery for greater comfort and a sharper look, made from breathable material designed to reduce water retention; improved visibility of the instrumentation through a new sports steering wheel; an optional Fusion MP3 music system now controllable through a waterproof dash mounted remote control; and a new generation of high-torque Weber 850MPE engine intended to provide improved fuel efficiency, available with a choice of power outputs and a power reduction key offering a “learner mode” for jet tender newcomers.