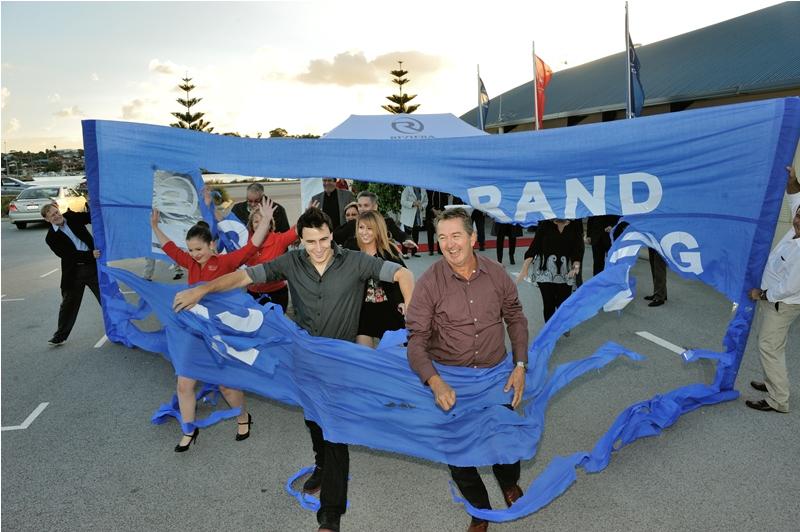 According to Riviera, it was a cocktail party to remember for those who joined the new team, as they ran through the football-style banner to mark the occasion before raising their glasses of Moet in a toast to Riviera’s newest dealership in Western Australia.

Riviera 47 Enclosed Flybridge owner Clint Jakovich led the team through the banner and said it was a real privilege to be part of such a momentous occasion.

“It was an awesome evening, really well organised, the food was fantastic and the company was great,” he said.

“It’s great to have a new dealer in town and Carl is very knowledgeable and passionate about Riviera and I am sure he will be very successful.”

Carl said there was a real need for a Riviera presence in Mandurah, located 75km south of Perth, and he hoped to offer a new level of service and knowledge to his owners through a host of functions, events and owner experiences.

“There are 550 Rivieras in Western Australia, 140 of them are in the Mandurah area alone,” Carl said.

“As a Riviera owner I never had the opportunity to go on a lot of Perth-based events because we were some distance from Perth, but I have a real passion for the Riviera brand, the product and the people.

“Bill and Waverley have owned three Rivieras and are iconic for the Riviera brand in our area. They love the boats and support the brand very well,” Carl said.

Bill said it was an honour to open the new R Marine Mandurah dealership.

“We got quite a surprise because we flew back from Adelaide to be at the opening but we had no idea we would be asked to do the honours,” he said.

“Riviera is now well represented in Mandurah and Carl is very well respected within the town so I am sure he will do well. We had a great night at the official opening, it was very professional and entertaining.”