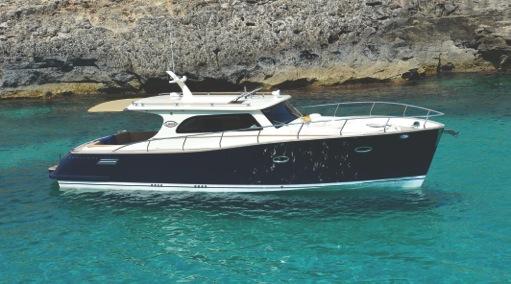 After two years on the drawing board, Clipper Motor Yachts recently announced the arrival of a new range of lobster-style sedan cruisers.

Clipper’s managing director, Brett Thurley, initially began the process with a design that he and Mark Campion of Clipper collaborated on, to create what they describe as “a beautifully styled sedan with flared hull and tumblehome transom in the Newport, Rhode Island tradition”.

Labeled as the Hudson Bay series, the range will initially comprise of a 28ft, 34ft and 39ft model that offers styling and boat building which is said to invoke a traditional exterior profile with a European flair and internally contemporary décor with classic Aniegre wood cabinetry and trim. A classic choice of painted hull colours such as navy blue, silver and cream are also available to personalise the craft.

“These superbly styled vessels are crafted for the buyer who wants something with a little more class and individuality over the production sports cruiser,” said Thurley.

“We have chosen to have them built in a custom shipyard in Europe to ensure a finish of the highest hand built quality, befitting this style of vessel.”

The models feature single diesel shaft-drive power and planing hulls for Clipper says is exceptional fuel economy and reliability, and will run between 20-24 knots.

The 34ft and 39ft offer an enclosed sedan layout with the galley upstairs on the same level as the cockpit. Clipper says innovative features include a sunroof, extendable cockpit awning, spacious outdoor entertainment area with bbq, fridge and L-shaped cockpit seating with table.

These vessels are also said to boast a world first design feature — an overhead rain shower head with hot and cold mixer under the sedan roof to offer a true outdoor shower experience after a swim in the morning or freshening up before dinner.

“There is nothing better than having a full blown shower after a day on the water or a swim in the ocean, and I find the usual transom showers just don’t do it so we decided to change that,” Thurley said.

Two cabins have also been incorporated to accommodate a family with kids.

Based on customer feedback from boat shows and events, the focus was to create a family friendly-layout to appeal to mums and dads wanting to spend cruising weekends aboard rather than just day boating,” Thurley said.

All three models will be unveiled and available to own this year. The models will receive their world premier at the Gold Coast Marine Expo during the first weekend of November. Visit Clipper Motor Yachts for more information.